In Which Judge Lansing Walks Into Eternity 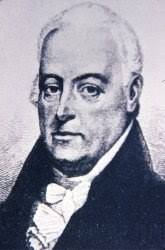 There is always a particular element of mystery when someone disappears for no known reason. When that someone happens to be one of the most venerable and well-known figures in the country--a former Mayor (of Albany,) military secretary to General Philip Schuyler, New York State Assemblyman (and Speaker,) delegate to the Constitutional Convention, and Chief Justice and Chancellor to the New York Supreme Court, his sudden vanishing becomes even stranger

But that is exactly what happened to John Ten Eyck Lansing on the evening of December 12, 1829. The seventy-six year old retired judge came to New York from his home in Albany that same morning and took a room at the City Hotel. From what we know of it, his day was as quiet and routine as can be imagined. He was scheduled to have tea at six o’clock with a friend. At dusk, he left the hotel, probably to mail letters before heading for his engagement. After that, he appeared to simply step into a void from which he never returned.

While there was naturally a great deal of excitement and concern about his inexplicable disappearance, the New York papers, oddly, did not even mention the event for over two weeks. It was not until the 29th that the newspapers carried brief mention of the mystery, along with offering a reward of $100 for any information about what had befallen Lansing. So far as is known, these advertisements got no reply. It is striking how, unlike other high-profile disappearances, such as Judge Crater and Dorothy Arnold, there was a complete lack of the usual "sightings," speculation, hoax stories, and wild rumor about his disappearance. Not even the crackpots could guess what had happened to John Lansing.

The only thing approaching a clue we have ever received in this story comes from a memoir of journalist and politician Thurlow Weed, which was published by his grandson. It claimed that Weed knew a lot of political and social “hidden history.” One day, so the story goes, Weed was visited by “a gentleman of high position” with some documents proving Lansing had been murdered. Supposedly, these papers detailed the motives and circumstances of this killing, and even named the people directly involved with the crime. Weed was told to make this information public after all these men, “who had lived useful lives, and died with unblemished reputations” had safely passed away. By 1870, all these men, as well as Weed’s informant, were in their graves. However, Weed learned that this information would hurt innocent people who shared “the strong inducement which prompted the crime.” Many of these people “occupied high positions and enjoyed public confidence,” and their lives would be ruined if the truth about Lansing’s death was ever revealed. As a result, when Weed died in 1882, he took the secret with him.

There is no other evidence for this narrative, which, frankly, reads like some of the worst fiction of the era. It is, however, the only "solution" to Lansing’s disappearance that has ever been publicly offered.

[A footnote: This was not the first time Chancellor Lansing made his mark in the annals of true crime. In 1800, he was the judge in the famous trial of Levi Weeks for the murder of his sweetheart Gulielma Sands. Among Weeks’ defense attorneys were Aaron Burr and Alexander Hamilton, who would, of course, eventually create scandal of their own. It is small wonder that a legend arose stating that everyone involved in the Sands case was cursed.]
Posted by Undine at 4:41 AM