A pleasantly creepy little tale appeared in the "Logansport Press" on June 9, 1960:


Lynn, Ind.-The monster scare has returned to Indiana. A few years ago it was the giant Churubusco turtle which gathered fame throughout the state but eluded capture until it finally was forgotten. Now it's the monster of Craig's Well. This monster, which is described as "an eerie beast with a dome-shaped head, two bulbous eyes and eight flailing tenacles as long as a man's arm," resides in a cistern on Dan Craig's farm, four miles south of here on the Randolph County line.

Dan Craig, 56, said he first spotted the "thing" about a year ago but has kept it secret until now. Eastern Indiana got the first reports of the monster scare last Saturday when Craig succumbed to curiosity and pumped the 12-foot-deep cistern dry. The bottom, covered with years of debris, disclosed the octopus-like monster crawling among the decaying timbers. "But in the gloom," Craig said, "he was hard to see." Craig described the monster's body as  "mushroom colored" and said the tentacles have gray lobster-type claws on the ends. Many of the visitors who have come to his farm in the last few days have asked. "How did it get there?" Craig's theory is someone brought the odd creature back from the tropics when it was small. "When it grew to the dangerous stage," Craig said, "they looked for a place to get rid of it and picked my well." 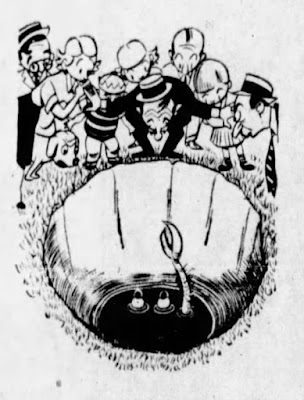 Craig said he will have a man uncap the well and pen the narrow top so the interior can be entered with safety. But the job can't be done for two weeks. There is a hole near the bottom of the cistern which may be the mouth of a cave and lead to the outside. Craig reported. Exactly where it might go, he doesn't know. "In the meantime," Craig said, "I keep the well covered to protect the wife and four youngsters."


Another newspaper story added the distressing detail that a farmer lowered into the well a fish on a string. He pulled it up a while later, "slashed to ribbons." He fed the mutilated fish to his cat.

The well was eventually drained, but the "monster" had vanished. Interestingly, later that year numerous people made credible reports of seeing a "monster" in Hollow Block Lake, an abandoned clay pit about 30 miles north of Lynn, leading to speculation that Craig's beast had found a new home.

As for the answer to the mystery of what was in Craig's cistern, well, that seems obvious.

Cthulhu, come on down!
Posted by Undine at 4:54 AM