Magazine Clipping of the Day 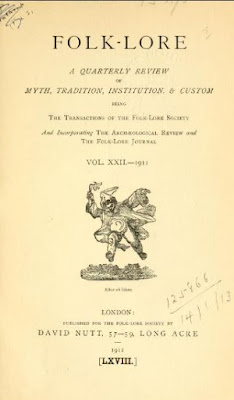 Let's talk ghostly man-monkeys, shall we? This tale was recorded in the "Journal of the Folk-lore Society," Volume 22 (1911):


Let me tell you of an incident which happened within my own knowledge, and which could probably be paralleled in any county in England. On the 2ist January, 1879, a labouring man was sent with a horse and cart from Ranton Abbey in Staffordshire to Woodcote Hall, Shropshire, a distance of fourteen or fifteen miles. On the way he had to pass over a bridge which carries the high road over the Birmingham and Liverpool Canal. The canal runs through a deep cutting between spoil-banks planted with trees, the bridge is of peculiar construction, and the whole is a rather fine bit of engineering work by Telford. It is a picturesque spot with an eerie and uncanny reputation.
Well, the man returned late at night with his empty cart and tired horse, when just as he reached the bridge a black Thing with white eyes sprang out of the trees and alighted on the horse's back. [A cat, did ye say? No, it wunna no cat.] The weary horse broke into a canter; the terrified man lashed at the intruder; but to his horror the whip went through the Thing, and fell from his hand to the ground. How he got rid of the invader he never knew, but at length, his horse "all of a lather," he reached the village of Woodseaves, and there told his tale, alarming one of his hearers, (whom I know well to this day), so much that he stayed at Woodseaves all night rather than cross the Big Bridge to reach his home.

Well, the ghost-seer got home safely at last with his horse and cart, perfectly sober, as I was assured a few days later by his master, who was watching for his return; and the whip was picked up next day just where he reported having dropped it. A couple of days or so afterwards, the village policeman called on Mr. Bailey, the man's master, and desired him to give information of his having been stopped and robbed on the Big Bridge a few nights before, (for such was the form in which the story had reached the ears of the representative of the Law). Mr. Bailey, amused, gave him the correct version. The policeman was much disappointed. He was a local man, (which Mr. Bailey was not), and well up in the local traditions.

"Oh, was that all, sir?" he said. "Oh, I know what that was. That was the Man-Monkey, sir, as always does come again at the Big Bridge, ever since the man was drowned in the Cut."

That last bit does leave one wondering just what it takes to surprise a Shropshire copper.
Posted by Undine at 4:39 AM