A Slip in Time 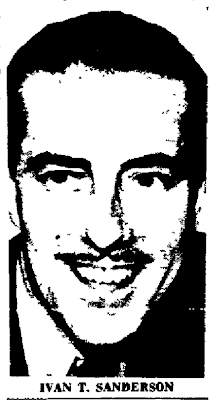 “Time-slips,” the most common name for the alleged experience of “visiting” another period in history, are one of the most intriguing forms of paranormal experiences. Probably the most famous example comes from Charlotte Moberly and Eleanor Jourdain, two English women who, while touring Versailles in 1901, claimed to have briefly seen it as it was at the dawn of the French Revolution.

Assuming time-slips are a genuine psychic adventure, no one has any idea what exactly they are, or what might trigger them. Most people, of course, deny they truly happen at all.

Recorded episodes of time-slips come in varying degrees of credibility. To my mind, one of the most convincing accounts comes from biologist and author Ivan T. Sanderson. Sanderson was rationalist enough to bring a clear-headed, facts-driven approach to his experiences, while remaining open-minded enough to acknowledge that during his life, he saw many things that simply couldn’t be explained.

His time-slip story (related in his book “More ‘Things’”,) has a convincing simplicity that cannot be easily dismissed, particularly as he stated flatly that occult matters had never interested him: “I have only one life to lead (that I know of) and I’ve been far too busy trying to catch up with the more pragmatic facts of it.”

His story took place in Pont Beudet, Haiti some years ago, where he, his wife, and his assistant Frederick G. Allsop were engaged in a biological survey. One evening, the trio were driving down an old dirt road that quickly engulfed the car in mud, leaving them stranded. They attempted to walk back to their home, but after traveling most of the night, they became exhausted. They encountered a car driven by an American doctor, but he was on his way to an urgent case, and had no room for all three of them. He agreed to try to pick them up on his return trip. The three of them grimly slogged on, until Sanderson looked up and suddenly noticed that everything around him was transformed. In the brilliant moonlight, he saw that he was surrounded by houses of various shapes and sizes—and all of them “casting shadows appropriate to their positions.” Their previously dusty road was now muddy, with patches of cobblestones. The homes appeared to be of the medieval or Elizabethan period, and he somehow immediately knew he was in Paris. It was not a static scene, as would be the case in a mirage. He saw the flickering glow of candlelight in some windows, and hanging lanterns were gently swaying, as if in a breeze—a breeze he did not feel. Otherwise, the scene before him appeared utterly real.

While still trying to grasp what he was seeing, his wife, who had been walking behind him, suddenly stopped and let out a gasp. When he asked what was wrong, she was speechless for a moment, but then began describing the precise scene he was experiencing.

At that point, wrote Sanderson, they both had a hard time finding speech. His shock only deepened when his wife blurted, “How did we get to Paris five hundred years ago?”

They continued to examine everything around them—apparently they were in perfect agreement with every detail—but a strange weakness began to descend upon them. Sanderson called to Allsop, who was some distance ahead. They tried to catch up to the assistant, but became so dizzy they both had to sit—on what they both saw as a tall, rough Parisian curbstone. Allsop came back to them and tried to find out what was wrong, but the Sandersons did not know how to answer. Allsop gave each of them a cigarette. Staring into the flame of his lighter somehow brought the Sandersons “back” to reality. When they looked around again, 15th century France had vanished, replaced by the familiar Haitian surroundings.

By the time the doctor had returned and brought them home, it was close to dawn. They were stunned to find their house servants, all of them local residents, had not departed for the night as usual, but had a freshly prepared meal and hot baths waiting for them. The next morning, their housekeeper, Margo, whom Sanderson described as a “’guider’ of tradition,” someone that “stupid, or even sensible” outsiders would call a “priestess,” refused to say how she knew exactly when they would return. He had the impression that she also knew of their very strange experience, but that was never explained, either. Later, however, a young Haitian man told Sanderson, “You saw things, didn’t you? You don’t believe it, but you could always see things if you wanted to.”

That last line has haunted me ever since I first read Sanderson’s book some years ago. Just how much could we all see—or know—if we really wanted to?

[Note:  Here is another account of Sanderson's odd experience.]
Posted by Undine at 4:55 AM