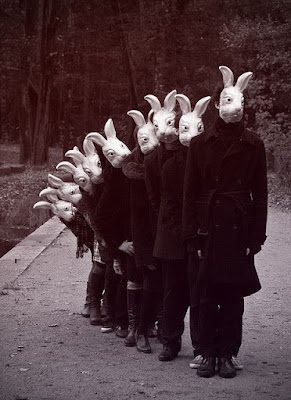 Oh, just another cautionary tale about the hazards of hunting killer ghost rabbits. This one is said to haunt an ancient church at the Cornish village Egloshayle:


If it were otherwise, you might now see—but never save when the moon is bright—a white rabbit gambolling about this open space beside the churchyard wall; a pretty, long-eared rabbit with pink eyes, like any child's pet escaped from its hutch. It goes loppeting about among the grasses by the corner of the marsh; and if any one should pass, will sit and look at him with fearless eyes. And well it may. It has nothing to dread from any one dwelling in those parts. No villager would attempt to catch it. No boy would aim a blow at it. If any one walking late sees the white rabbit lopping at his heels, he makes no effort to drive it away, but quickens his pace, and hopes some good angel may stand between him and harm. A belated postman, terrified to find he could not shake off the pretty white creature at his heels, lost his head and turned and struck fiercely at it with his oaken cudgel. He felt the stick fall on the soft back of the rabbit, such a blow as might have killed a much larger animal. But the rabbit lopped on as if nothing had happened. The cudgel it was which was broken—shivered into splinters, as if it had struck upon a rock.

No one can tell the history of the rabbit; but our grandfathers knew and feared it as we do ourselves; and it was in their time that the last deliberate effort to meddle with the creature took place. The attempt was made by a stranger, and it happened in this wise. A number of young men were drinking together in the bar-room of the chief inn of the town. As the evening wore away, the talk grew high; and, at last, when all the party were heated, somebody spoke of the white rabbit. Instantly the stranger began to jeer—a silly story such as that would never be believed outside a poky country town where nobody had anything better to do than to listen to the first idle tale told him. What harm could a rabbit do anybody? He would like nothing better than to shoot it.

One of the others drew aside the shutter and looked out. The street was as bright as day, and overhead they could see the full moon sailing, free of clouds. "Tha'd best go now," he said. "When the moon shines like this, tha'll find the rabbit by the church."

A gun was hanging on the wall. It was taken down and loaded amid a babble of jeers and angry retorts: and then the party crowded to the door to watch the stranger stride down the moonlit street, whistling merrily as he went. They saw him pass upon the bridge, and then went back to their bottles.

But some strange feeling of uneasiness had settled over them. Not one seemed inclined to sit down again. They moved restlessly about the room, and presently one of them went to the door and looked out. The others asked eagerly if he heard anything, though they knew the stranger could not have reached the church; and then one suggested that it was a shame to allow a man who had no knowledge of his danger to encounter it alone. The others agreed as readily as men will when they have done what does not please them, and without more delay they set off in a body. They trudged along saying nothing; but when they came near the church, they heard a report and a loud cry; and, with one accord, they ran to the open space with beating hearts. Neither man nor rabbit was to be seen. They ran up and down calling his name; there was no reply. He was not in the lane, nor on the high road, nor on the marsh, where, under the bright moonlight, the motion of a water hen could have been seen with ease. At last one of the searchers leapt up on the churchyard wall, and sprang down on the inner side, calling on his friends to follow him.

There they found him lying dead, with one barrel of his gun discharged, and the contents buried in his body. That happened many years ago; but still the stranger may be seen leaning over the low wall, pointing an ancient flint-lock gun at some object which moves quickly in the long grass.

~Arthur Hamilton Norway, "Highways and Byways of Devon and Cornwall"

All together now: THAT WASCALLY WABBIT!
Posted by Undine at 4:32 AM