The Thing That Went Clawing in the Night 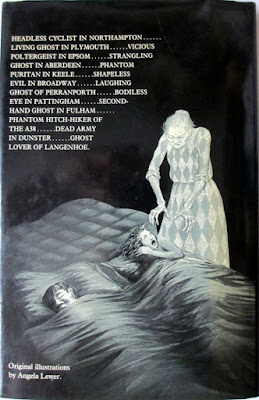 Accounts of haunted dwellings tend to be pretty bog-standard stuff. Spectral figures drifting over the lawn, mysterious rappings at night. Murder victims unable to find peace, or villains with guilty consciences that won’t allow them to rest. To be honest, when you’ve read enough of them, real-life ghost stories can get pretty dull. For that reason, when you come across one that combines unusually disturbing features with an utterly inexplicable cause, one has to sit up and take notice.

In early 1975, two young nursing students, Shirley Brown and Gail Bruce, became roommates in a flat in an old tenement in Dundee, Scotland. It was a modest place: tiny living room, a bedroom, a small bathroom, and a postage-stamp sized kitchenette. Still, it suited their needs, and as the two women were friends who were enjoying the training for their chosen professions, life seemed pretty good.

For ten months, neither woman saw anything unusual about their residence. Then, in January 1976, things began getting very weird indeed. One morning, Shirley had the afternoon shift, so she stayed in bed while Gail got ready to leave for work. Before Gail left, she noticed that Shirley was sitting up and staring at her in a very peculiar way. When she asked if anything was wrong, Shirley just turned over in bed silently.

Later, as the two had lunch together, Gail told her friend that something very odd had happened the previous night. For whatever reason, she found it impossible to sleep. At about 3:30, the hall light came on, followed by the sound of someone slowly moving around in their bathroom. Naturally, her first thought was of burglars...except she was certain the front door was locked. After a moment, the footsteps stopped and the light went out.

Then Gail saw something even more disturbing. There was an old woman in a blue nightgown standing next to Shirley’s bed. Gail felt an intense aura of evil around her. The intruder and Shirley were talking together intently, but the conversation was too whispered and muttered for her to make out what was being said. Gail closed her eyes for a moment, then opened them. The old woman was gone. The next day, Shirley claimed to have no memory of any of this, but she was just as terrified as Gail. Not knowing what else to do, the women agreed that neither would ever be alone in the flat again.

One night about a week later, Shirley lay in bed reading while Gail was getting ready for bed in the bathroom. Then she heard footsteps in the kitchenette, which was adjacent to the bedroom. Nervously, she rapped on the wall between the two rooms, hoping against hope it was just Gail in there. In response, there was the menacing sound of what she later described as “giant talons” violently clawing at the wall. Shirley screamed, which brought Gail running in from the bathroom. When she entered the room, the frightening sounds stopped. As the two women--now understandably scared for their lives--huddled together on the bed, the uproar began again, with even greater intensity. For some fifteen minutes, they heard the sound of wild tearing and scratching, as if some demonic beast was determined to claw down the wall and tear the frantic women to pieces. The pair quickly threw some clothes on so they could escape, but then they realized their keys were on the kitchen table. In order to retrieve them, they would have to confront whatever clawed nightmare thing had taken over their flat.

Staying where they were, however, seemed even more terrifying. With the courage that can come from desperation, the women flung open the bedroom door and switched on the light. With a blinding flash, the bulb fused. Simultaneously, the hideous clawing noises stopped. The pair raced across the room, grabbed their keys, and ran, not slowing down until they reached the safety of a friend’s apartment.

The following morning, Gail and Shirley only returned to their flat long enough to pack their belongings. Despite the uproar of the previous night, nothing was out of place, and the kitchen wall was unmarked.

The two never entered the tenement again. They briefly considered looking into the flat’s history, to see if it provided any clues regarding the horror they had experienced. However, on second thought, they decided it might be best not to know.

Paranormal researcher Peter Moss, who interviewed Gail and Shirley as part of his book “Ghosts Over Britain,” believed they were entirely truthful. Unfortunately, he could not provide any more explanation for this sudden, brief, and extremely disturbing experience than the women could.

There are just some things that defy anyone’s explanation.
Posted by Undine at 4:43 AM