An ancient cross which puts a curse on anyone who dares to meddle with it. No, it's not the plot of an M.R. James story, but rather a news item in the Saskatoon "Star Phoenix," March 28, 1969:


Copplestone, England.--Residents in this Devon village fear the consequences of an ancient Saxon curse when municipal workmen move the massive stone cross which has stood here for 1,000 years.

Legend has it that anyone tampering with the 20-ton granite monument will suffer a life of misfortune and eternal damnation.

Thirty years ago the council decided the cross was a traffic hazard and planned moving it, but workmen refused to do the job. Last year the scheme was revived and this time objections came from local citizens, led by 75-year-old Madge Pope, who petitioned officials to heed the warnings.

No action was taken for six months, but now workmen have begun the long task of digging up the stone from its 10th century foundations and re-erecting it on a new site.

We are not worried about the curse, said a spokesman for the county highway department. And a workman commented, "if there is a curse, it will only fall on the boss. He gave the order to move it. My mate and I are just doing as we are told."

"They are all very foolish to interfere with it," she says.

"The curse does work. Nobody in the village would dream of touching it--we all know what happened to others who tried to interfere with it."


"Well," I thought. "This is getting good."  I eagerly searched the archives for the sequel, wondering what was the final body count from this act of desecration.

And then I came upon this story from the (Victoria, British Columbia) "Times-Colonist" from September 6 of the same year. 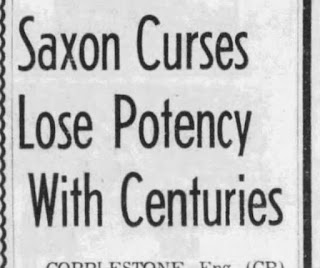 Copplestone. Eng.--Saxon curses may have lost their potency after 1.000 years. At any rate, no dire consequences appear to have followed the shifting of an ancient stone cross in this Devon village in the interest of highway safety.

The cross, a Saxon monument which has stood at the village crossroads since the 10th century, was supposed to bring a lifetime of misfortune and eternal damnation to anyone tampering with it. In modern times it has proved a traffic hazard, impeding the view of motorists approaching the crossroads. But when the council first proposed moving it 30 years ago, workmen refused on account of the curse and the scheme was dropped.

Earlier this year when the idea was revived, some villagers headed by 75-year-old Madge Pope pleaded with the council to heed the ancient warnings. The council compromised, agreeing to move the cross only a few yards from its original site and to keep it on the crossroads.

The job was done about two months ago. apparently without supernatural retribution.

Bummer. Curses just aren't what they used to be in the good old days.
Posted by Undine at 4:32 AM