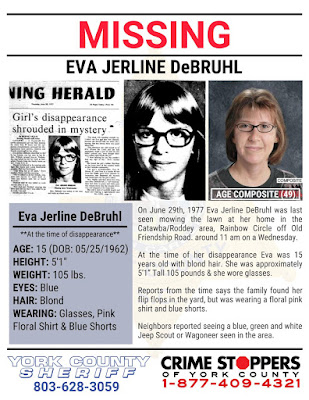 This hauntingly weird disappearance is another case from the "mini mysteries" file. From the (Greenwood, South Carolina) "Index-Journal," July 3, 2017:


Forty years ago, a nightmare started for the Debruhl family. It lasts to this day.

Eva Debruhl, 15, was outside her home in rural York County southeast of Rock Hill on June 29, 1977. She was mowing the lawn. She disappeared.

"She vanished into thin air," said Eva's sister, Tami Settlemyer. "From the very beginning we knew something was terribly wrong."

A glass of iced tea was untouched on a table. Her grandmother saw a white man on the porch, and a four-wheel drive vehicle, approach the house twice that day. But nobody ever found that man, or who he was, or anything else about him.  Eva Debruhl's father was a mechanic--men approaching the house was routine.

Nobody ever found Eva. She has never been spotted. Not once. A teenaged girl was gone.

A manhunt in the summer of 1977 afterward with hundreds of volunteers assisting York County deputies was fruitless. Skulls and bones found through the late 2000s in York County and in other parts of the country turned out to be other people. Missing persons organizations put out huge numbers of social media items afterward. The case received some national attention a decade ago, including Nancy Grace on CNN.

Yet 40 years later, the family is no closer to "closure" than the first day Eva disappeared. The family's belief is Eva is not alive.

"We have always believed it was a kidnapping. Eva would have somehow made contact in all these years if she was still alive," Settlemyer said. "We do believe she is with the Lord, and we will see her again in heaven. But we want to have closure."

Settlemyer has remained in close contact with several York County Sheriff's Office detectives all her adult life as many officers worked the case. Deputies dug into a well on the back of the property, traveled to other states interviewing serial killers and chasing potential connections, but no evidence has been found.

"You have to remember that 40 years ago technology was not what it is today," Settlemyer said. "I firmly believe if it happened today, the technology advances would have solved the crime. We would know, Now we have cell phones, cell phone pings, credit card trails, all the things that help police catch people. The police have done a superb job but 1977 technology was totally different."

Police put Debruhl's DNA and the DNA of all family members in a national database as technology advances made it easier for police to match evidence and crime scenes, but nothing has ever come up to match the DNA.

A computer-generated photo of what Debruhl might look like--Eva would be 55 years old--still is circulated by York County deputies on its Crime Stoppers internet page.

"We have never stopped looking at the case," said Trent Faris, spokesman for the York County Sheriff's Office. "Four decades ago all the department's resources were put on the case. The search was active for more than two months. It has been looked at since, many, many times."

Several detectives have had the case over the decades, Faris said, and interviews have been done with family, friends and others for years. But nothing changed.

The case had hopes a few times. Several calls to police shortly after the crime from men claiming knowledge turned out to be blackmail attempts. A girl's body found in Lumberton, North Carolina, was someone else. A serial killer named Henry Lee Lucas was considered, but the evidence didn't match. Still sheriff's detectives went to Texas to interview Lucas.

No new information has come to police in several years, Faris said. But that doesn't mean it never will.

"We haven't given up on finding out what happened 40 years ago," Faris said. The family hasn't given up, either. Willard Debruhl, Eva's father, died in 1997, almost 20 years to the day after his youngest daughter went missing. He had sold everything, hired a private investigator and spent the last two decades of his life searching for his daughter, said Settlemyer.

"My father died from a broken heart," she said.

The past 20 years since have been filled with the same hope and hopelessness for sister Elaine and Tami, and mother Opal. Thursday, 40 years after Eva disappeared, her family will gather at her mother's home. They will pray, and hug, and hope. They have gathered every year for the anniversary to do the same thing.

"Some days it is like yesterday, but it has been 40 years," Settlemyer said. "I think about her every day. She was such a sweet, wonderful, beautiful young girl. We just want to bring her home."

To date, Eva's vanishing remains unsolved.
Posted by Undine at 4:34 AM