This tale of a Philly church's paranormal receptionist comes from the "Sheboygan Press,"August 14, 1908:


Philadelphia--Old St. Paul's church, headquarters of the Protestant Episcopal city mission, has a ghost. It is an eccentric shade which whisks up stairways and disappears into nothingness, but it also is up to date. When the office force has departed and the quaint old building on Third street is secure against intruders with stout locks and bolts, the ghost answers the telephone, which conduct is so utterly foreign to the popular conception of ghosts' abilities that, it has dumbfounded Rev. H. Cresson McHenry and his assistants.

On two occasions the strange visitor has answered the 'phone when the office force was absent and the building locked. Its answers, although briefly made, have indicated that the ghost is well acquainted with movements of the staff. The shade informed a friend of Mr. McHenry that he "had just left the mission," and to Mrs. George Somerer, wife of one of Mr. McHenry's assistants, it imparted the information that her husband "would be home to supper." Both persons who conversed with the unknown occupant of the mission declare that its voice was modulated to the softest tones. 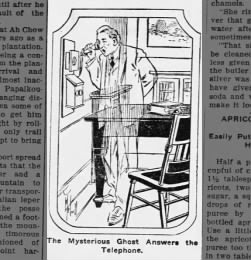 Mr. McHenry saw the ghost on July 4. The office force had a holiday, but Mr. McHenry visited the church to open his mail. As he was unlocking the iron gates at the entrance to the churchyard he glanced up at one of he windows and was astonished to see what appeared to be a man standing on the stairway inside the building.

This stairway leads from the offices of the city mission in the basement to the church auditorium. As Mr. McHenry opened the gate the figure glided rapidly up the stairway. disappearing from view. The minister entered the church, locked the door behind him to prevent the escape of the intruder, and searched the entire church from cellar to roof. He failed to find any trace of the visitor. Every door and window was locked securely and the desks untouched.

The story seemed to disappear from the newspapers after this, so I have no idea if the mystery was ever resolved.
Posted by Undine at 4:38 AM