The Case of the Disputed Deathbed 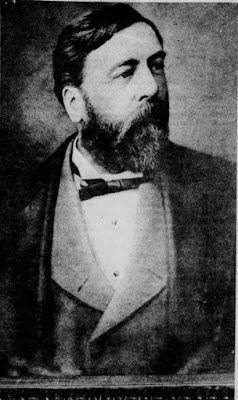 Walton Dwight was, in his own charmingly Freudian words, a man who liked "to bore with a big auger." He was typical of the builders and developers who did so much to transform 19th century America from a rural land into an urban powerhouse. His life reads like a classic American success story...right until it ended as a classic American mystery.

Dwight first rose to some prominence during the Civil War, where he fought with distinction for the Union, rising to the rank of Colonel. After being severely wounded at Gettysburg, Dwight retired from the military. He settled in Binghamton, New York, married a charming young heiress, Anna Dusenbury, and turned his attention to the world of business. His starting capital came through a seemingly tragic event. While he and his family were out of town, his mansion inexplicably caught fire and burned to the ground. Happily, it was very heavily insured, netting the Colonel a tidy sum which he invested in various development schemes.

He quickly found success as a lumber manufacturer, a mine operator, and a real estate tycoon. The physically-impressive Dwight (he was 6'3", 250 pounds, and boasted a long blond beard) soon became financially imposing, as well. He was responsible for many building projects in and around Binghamton, and in 1871 served as the town's mayor. (His campaign slogan was, "I have prospered in Binghamton. Let Binghamton prosper with me!”) A contemporary described Dwight as "tall in stature, of handsome appearance and pleasing address, dignified in learning, yet cordial in social intercourse, warm in his welcome, and princely in hospitality.” There was talk of him as an eventual governor of New York state.

Sadly, the 1870s proved to be unkind to our hero. The fiscal panic of 1873 was a disaster from which he never recovered. His extensive financial operations nosedived. In his efforts to save them, he ran through his own money, then his wife's personal fortune. By 1878, he was some $400,000 in debt. (Over $9 million in today's dollars.) Worse still, his normally robust health suddenly and dramatically failed him. On November 15, 1878, he passed away in a hotel room at the age of forty-one. Only one person--a friend of Dwight's named Charles Hull--was present at his deathbed.

Well, maybe it was a deathbed. The question of what precisely happened to Colonel Dwight on that November day proved to be a leading topic in the law courts of the time.

Almost immediately after Dwight's passing, it emerged that there were some very curious aspects to the financier's last days. For one thing, Dwight went into purchasing life insurance on a truly epic scale. He took out policies on himself with no less than twenty-one different companies, for a total of some $420,000. For those hard-bitten, battle-tested men at those insurance companies, such enthusiasm instantly raised their eyebrows.

Those brows were further raised when the contents of Dwight's will became known. Most of his bequests were normal enough, if curiously lavish for someone of his financial travails. But when a man leaves $5,000 to the Coroner and twice that to the Surrogate who admitted the will to probate, even the most trusting start to mutter that there was some jiggery-pokery going on.

Although one or two of the insurance companies ponied up to the tune of $50,000, others rebelled, with the result that Dwight's loved ones spent the next five years in court battling over the Colonel's dubious deathbed. Walton's heirs presented a beautifully simple story: the Colonel met an untimely demise due to gastric fever. The large amounts of life insurance he bought right before the sad event just showed what a prudent and far-seeing person he was. The insurance companies thought otherwise. They argued that the corpse known as "Colonel Walton Dwight" was a ringer, possibly procured from some medical college. The companies pointed to the curious fact that virtually the last thing Dwight did before "expiring" was to have himself shaved, suggesting that the only suitable corpse to be found was lacking facial hair. They also presented in court a physician who testified that he did not believe the body presented for insurance purposes was that of the Colonel. The doctors who had performed the autopsy believed that this dead man had died of strangulation, leading to the theory that the soi-disant Dwight was in fact some hanged criminal. The genuine article, meanwhile, slipped away, probably to Mexico or South America.

One school of thought proposed that the living Dwight had been packed in a box and mailed out of town, where some co-conspirators unpacked him and set him free to enjoy the fruits of his fraud. Others, who accepted that the Colonel had pulled a fast one on everybody but who still believed that the "corpse" was truly his, had an alternate theory which sounds like something from a Wilkie Collins novel. They believed that Dwight had taken gelsemium in order to temporarily simulate his own death. (An empty bottle of the drug was found outside the room where he met his end.) A man who had once worked with Dwight swore he saw him on the streets of Chicago a month after the Colonel's "death."

The long legal battle provided excellent entertainment for onlookers, but, in the end, proved irritatingly inconclusive. Dwight's heirs lost the case, but only on legal technicalities--the Colonel had made certain false statements on his insurance applications. The question of when, where, and how Walton Dwight truly died--and who, if anyone, lies in the ornate and lavish tomb the Colonel had built for himself--remains, in the words of an anonymous biographer, "the greatest of insurance mysteries."
Posted by Undine at 4:34 AM