Murder On the Cheap

As I have mentioned before, murder cases do not usually interest me unless they are unsolved and/or have an unusual quality to them. Simple, unadorned brutality is not something I care to dwell upon. However, every now and then I come upon a murder that is your usual banal evil with virtually no mystery at all, but is so utterly deranged from beginning to end that I find it noteworthy enough to include in the hallowed halls of Strange Company HQ.

As you may have already guessed, this week we shall look at an unjustly obscure example of one of those crimes. Behold, The Case of the $1.50 Hit Man.

At the center of our story is Gaylord V. Saunders, the pastor of a Methodist Episcopal church in Wabash, Indiana. As he entered his mid-thirties, Saunders, like so many people, had something of a mid-life crisis. His life felt empty. He needed a sense of meaning to his existence. He longed for excitement, emotional fulfillment, new challenges, a fresh road to travel. So, naturally, he moved to Indianapolis and enrolled in an embalming school. Unaccountably, his wife Neoma failed to heed the siren song of organ preservation and creating a remarkably lifelike appearance, so she and their children stayed behind in Wabash. 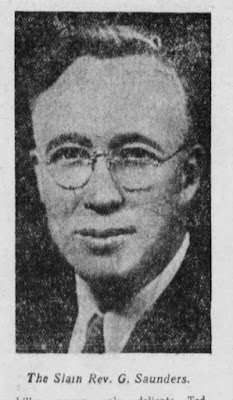 Over the embalming tools and formaldehyde, Saunders became friends with a classmate, 19-year-old Theodore Mathers. So far as anyone knew, Saunders' studies went along quite pleasantly until the morning of February 2, 1934, when he was discovered in his parked car, in a condition ideal for his recently-acquired skills. He had been shot in the back of the head.

As baffling as the crime may have initially appeared, it wound up being a candidate for the shortest unsolved murder on record. By the end of the following day, the police knew not only who killed Saunders and why, but a whole lot more besides. If anything, this was an investigation that elicited almost too much information. 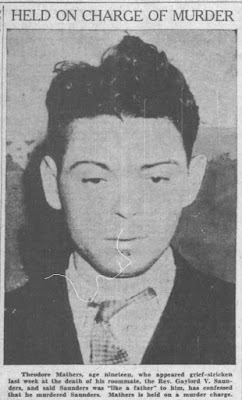 Theodore Mathers had a long-time friend named Masel Roe, to whom he confided all the details of his personal life. This was Mathers' error. No sooner had Saunders' body been found that Roe was telling police all he knew about the crime. And, brother, that was plenty.

Roe, you see, claimed to have witnessed Mathers shooting the aspiring undertaker. He explained to police, "Several times Mathers told me that his roommate, Saunders, was nuts and was going to kill his wife and children at Wabash. Mathers said he would rather kill Saunders than see him kill the children." Accordingly, on the night of February 1, Roe and Mathers escorted Saunders to a local tavern for some much-needed liquid courage. Then, the three got back in the car, with Saunders at the wheel, and "before I knew what had happened, Mathers shot Saunders through the head." After idly driving around town with the corpse--apparently the question of what to do with the body afterward had never previously occurred to these criminal masterminds--they simply stopped in a quiet spot, placed the body back in the driver's seat, took the dead man's watch and ring in order to simulate a robbery, and went to their respective homes to contemplate the strange byways of Life. At some point during the night, it finally entered Roe's mind that he was now an accessory to murder. This made him a bit uneasy. The next day, he went to the nearest police station to unburden himself. When detectives heard his tale, they naturally wished to conduct an interview with Mr. Mathers.

They tracked down Mathers at what was probably among the last places they expected to find him: the home of the newly-bereaved Neoma Saunders. He explained that he was there to help with the funeral arrangements. (As he himself was directly responsible for the need of such arrangements, this was an admirably considerate and mannerly touch.)

The police's first question to Mathers was probably what you yourself would be asking, given the opportunity: why did he shoot Saunders, and why was he taking such an interest in his victim's widow?

Mathers--who was just as chatty and self-incriminatory as his buddy--had a simple answer: Mrs. Saunders had hired him to do the deed. Three weeks earlier, he explained, Neoma paid him ten dollars to rid the world of her husband. He had invested eight dollars and fifty cents of his payment on the gun used for the deed.

Yes. Theodore Mathers was willing to commit murder for the net profit of a buck-fifty. Which gives a whole new meaning to the phrase, "life is cheap."

Mathers and Mrs. Saunders were immediately arrested and hauled back to Indianapolis. Roe was taken into custody as well, along with a nurse named Mabel Balke. Mathers had helpfully informed the authorities that Balke had known all about the murder plot, and had even been obliging enough to hide Saunders' watch and ring in her basement. (She later enlisted a Saunders family friend, Ross Curtis, to destroy the items.)

The foursome proved to be the most informative bunch of suspects on record. They were practically fighting to be the first to put their hands up. Neoma admitted to planning her husband's murder. Theodore admitted to carrying out these plans. Masel admitted to witnessing the deed. Mabel admitted to having prior knowledge of the crime. You couldn't find a more obvious Murder Incorporated if you tried. 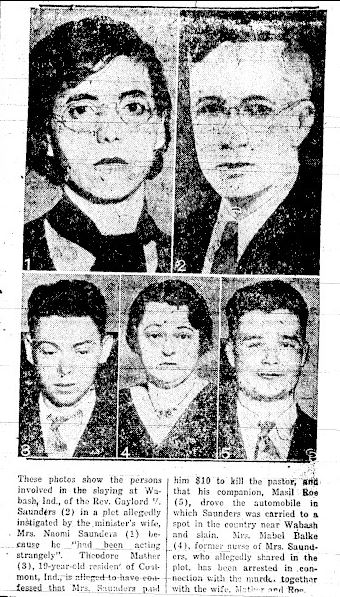 Mrs. Saunders was the first to face a jury. It was expected to be the least suspenseful murder trial on record. Everyone assumed it was not a question of if Neoma would take a seat in the electric chair, but when. Her lawyers did what lawyers generally do when given an apparently unwinnable case: they threw everything they had against the wall to see if any of it would stick.

The defense went for that time-honored tactic of blaming the victim. Every competent criminal defense attorney knows that no matter how overwhelming the case against your client may be, if you can just present an unlikable corpse, your murderer is off to the races. Neoma told heartrending tales of how she lived in fear of her insane husband. According to Neoma, Gaylord had threatened to kill their sons. Mrs. Saunders explained, "I wanted my husband killed because he was losing his mind and I had papers filed to put him in an insane asylum." (Presumably, she decided that murder was both cheaper and more efficient than institutionalization.) Mabel Balke agreed. She testified that, in her professional opinion, Mr. Saunders was losing his mind, and was a great danger to everyone around him.

But wait, there's more! The late embalming student was not just a lunatic, he was an alcoholic, marijuana addict, and "moral pervert" who subjected his wife to "unspeakable indignities" such as making her look at lewd pictures and listen to equally indecent stories. Ross Curtis testified that Mr. Saunders had once threatened to take a butcher knife to his spouse. When Curtis objected to this plan, Mr. Saunders bit him on the finger.

So, why did Neoma select young Theodore as her hit man? And why did he accept the job? For just the reason you might think: the two were having an affair. However, Mrs. Saunders managed to turn even that into an indictment of her husband. You see, Gaylord had forced them to become lovers. At knife-point.

Once the defense had finished blackening the victim's character, they moved on to disparaging their own client. They brought out the insanity defense. Mr. Saunders' many "unnatural acts" had driven his poor wife around the bend, causing her to believe her husband was possessed by the Devil. Three medical experts testified to their belief that whatever Neoma's mental state had been previously, she was--at the moment, at least--sane.

In response to all this, the prosecution settled for presenting the unvarnished facts: Mrs. Saunders was involved with another man, and wished to enjoy the $29,200 worth of life insurance she would collect if her husband met with a premature end.

The case made by the defense was patently ridiculous, but like so many patently ridiculous things in this world, it worked. After deliberating for a grand total of 80 minutes, the jury returned a verdict of not guilty, due to "temporary insanity." As the three doctors had ruled that Neoma was now perfectly compos mentis, that meant she was immediately free as the proverbial bird.

Mathers stood trial in April 1935. His lawyers, recognizing a good thing when they saw it, essentially repeated the same story given by Mrs. Saunders. Mathers, too, was insane at the time of the shooting. Being forced into a romance with Neoma, they explained, had driven him temporarily out of his mind.

Mrs. Saunders could not have been pleased with this argument.

Unfortunately for the defendant, jurors were getting a bit bored with this tactic, but they still showed him a certain amount of favoritism. Instead of finding him guilty of first-degree murder, they delivered a verdict of "involuntary manslaughter." One to ten years in prison. There were many petitions asking the court to give Mathers a suspended sentence, but these efforts on his behalf appear to have failed.

As for Mabel Balke and Masel Roe, the authorities decided it wasn't even worth the effort of putting them on trial. The law merely shrugged and let them go. And that was the end of what contemporary newspapers dubbed "The Ten-Dollar Murder."
Posted by Undine at 4:40 AM