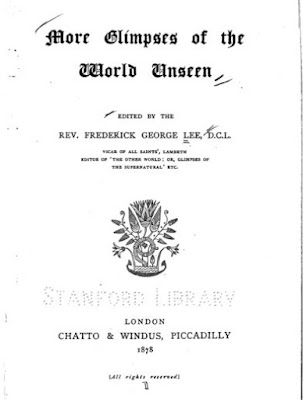 This eerie little tale was published by Frederick George Lee in his 1878 book "More Glimpses of the World Unseen."  It was prefaced with, "The following story was told to a lady by the sailor who witnessed the appearance."


David ____ went to sea under a very drunken, cruel, and profane captain. This captain fell ill, after hard drinking, and lay sick in his cabin. It was a moonlight night when David ____ and two other sailors were talking on deck, when they saw a form or figure suddenly fly out of the cabin, as it were, and felt an unmistakable gust of wind as it passed. He said to the others, "Did you see that?" They replied, "It is the soul of our old master." The figure was like a man's head and face, quite recognisable, with black flapping wings. It seemed to fly away into the dark distance.

David then went down to the captain's cabin and found him dead. No one else would go near to the corpse. So David wrapped and sewed it up in a hammock, said a prayer over it, and threw it into the sea.

I don't claim to be an expert on such matters, but this probably was not the best omen for the captain's afterlife.
Posted by Undine at 4:39 AM