This is a banner month for Strange Company HQ.  First there was Blackie, the talking and litigious cat, now...

Puffy, a cat that hypnotizes people, was named honorary President of the American Feline Society, Inc., today today and officially dubbed "King of All Cats."

Citing the cream-colored Persian for devoting his "phenomenal psychic powers" to War Bond sales and entertaining wounded veterans, Robert Lothar Kendell, the society's President, declared: "We truly believe you to be the greatest living feline, with powers never before possessed by a cat or, so far as we can learn, by any living creature other than a human being."

Puffy, credited with putting more than 300 persons into a hypnotic trance with his huge, unblinking eyes, was all puffed up over the honor, reported his owner-assistant, Arthur Newman, "He's autographing pictures with his paw print like crazy," said Newman.

It was one night last fall that Puffy, then a kitten, first demonstrated his powers. "He was sitting on the end of a night club bar," Newman recalls, his voice becoming hushed, "and a couple of girls came up to pet him. I didn't pay much attention until one of the girls nudged me and whispered, "Look at my friend!'

"Well, sir, that girl was simply out on her feet. It wasn't from drinking, either. I'm something of a hypnotist myself and I quickly realized that she was in a real hypnotic trance, brought on by Puffy's staring into her eyes."

Newman, who had bought Puffy in a pet shop for purposes of demonstrating that people should relax like cats, immediately started training him to stare even more fixedly, with such success that Puffy now can stare Newman down any time.

Thousands of servicemen in hospitals and canteens have seen Puffy perform. He stares into a subject's eyes while Newman slowly counts out loud. In less than 10 seconds the subject closes his eyes, goes rigid or relaxed, and has to be awakened by Newman.

Skeptics to the contrary, Newman insists it's Puffy and not himself that does the hypnotizing. "If that cat could only talk," he says, "I'd quit working and just manage Puffy."

People always feel better--headaches gone, and the like--after being hypnotized by Puffy, Newman says, because they have become relaxed in spite of themselves. Several have taken the pledge after watching Puffy do his act in a bar.


Here is a news item from the "Pottstown Mercury," December 16, 1944, showing Puffy's formidable talents in action: 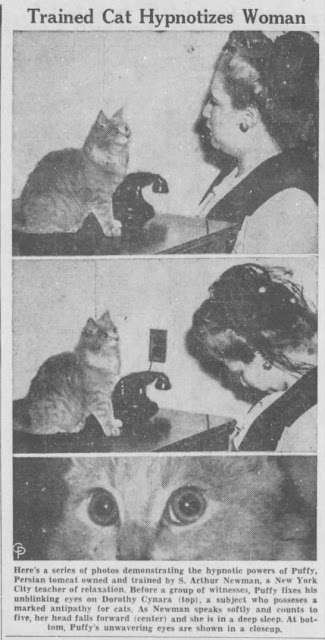 This may be my blog's finest hour. 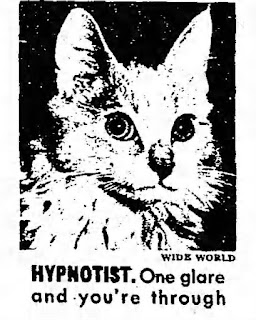