The Bridge King Gets a Bad Hand 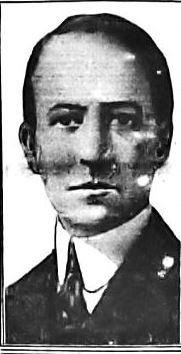 Even if you're not a fan of detective novels, you are surely familiar with the "locked-room murder," that classic example of the genre. However, you might not necessarily know that this staple of fiction was inspired by one notorious true crime.

The difference is, the real-life killing had no detective neatly wrapping things up in the last chapter.

The first part of Joseph Bowne Elwell's life was decidedly ordinary, even dull. He was born in New Jersey in 1876. After graduating from Andover, he worked as an insurance agent and a hardware salesman. He married Helen Derby in 1904.

However, Elwell only found real success because he was one of the fortunate few who found a way of turning a beloved hobby into a career. Elwell had a passion for the fashionable new card game called "Bridge." He also discovered that he was an excellent player. He became a teacher of the game. Then, Elwell came out with a number of highly successful handbooks (although his name was on the cover, they were actually written by his wife.) He parlayed his love of gambling into profitable side careers speculating on Wall Street and owning a string of race horses. Before long, he was not only the world's leading Bridge expert, he was an exceedingly wealthy man. He owned fine homes in New York, Palm Beach, and Saratoga, and moved in high society.

Unfortunately for his marriage, Elwell's favorite "socializing" was with attractive women, and in a manner that went far beyond just playing cards. His womanizing became so open and frequent that his wife finally had enough, and left him for her own house and her own life. Neither party was devastated by the separation.

Elwell's life chugged along very pleasantly until June 10, 1920. That night, he dined at New York's Ritz with a small group of friends: Mr. and Mrs. Walter Lewisohn, and Mrs. Lewisohn's sister, Viola Kraus. Viola was in a celebratory mood: On that very morning, her divorce from Victor von Schlegell had been finalized. In fact, Victor and his fiancee, Emily Anderson, were dining at the next table, in a similarly merry mood. If you believe the word of everyone involved, this was one of the most convivial divorces on record.

After dining, the Elwell party moved on to see a show at the New Amsterdam. This lasted until about 2 a.m., when the group broke up and left for their own homes. The Bridge King was in notably high spirits that night. And why not? He had money, fame, and the inestimable good fortune of being able to monetize activities he loved. His play was his work. He must have seen himself as blessed.

Elwell took a cab to his home on West 70th Street, stopping at a newsstand to buy a copy of the "Morning Telegraph." Despite his late night out, he did not immediately go to bed. Phone records would show that Viola Kraus phoned him soon after his return home. She later claimed it was over some unspecified triviality. Perhaps that was the case. At 4:30, Elwell phoned his stables in Far Rockaway, but got no answer. About an hour and a half later, he phoned a number in Garden City, New Jersey. We know no details about this call, other than that it was practically the last thing Joseph Elwell ever did.

At 6:15, the milkman left his usual delivery at Elwell's door. He noticed nothing amiss. An hour later, the mailman left letters in the vestibule. He brought the bottles of milk in, as well.

All was quiet at the Elwell residence until shortly after 8, when his housekeeper, Marie Larsen, unlocked the front door and let herself in as usual. When she came in, she glanced into a small room near the front door, and got the shock of her life when she saw a bald, pot-bellied, pajama-clad stranger sitting in a chair.

It took her a few seconds to realize that this intruder was, in fact, her employer. Without the wig, corset, and dentures he always wore when he faced the world, he was almost unrecognizable. (It later emerged that Elwell had no less than forty wigs hidden away in his home.) He had a prominent bullet hole in his forehead. Elwell was still alive, although unconscious. There was nothing anyone could do for him. He died shortly after being brought to the hospital.

The "how" of the murder proved to be the one explicable part of this crime. Elwell had been found with his recently-delivered mail by his chair. He had obviously come out of his bedroom sometime after 7:30 and collected his letters. He was reading one of them--an innocuous message from his Kentucky racing stable's trainer--when someone shot him with a .45 automatic that had been manufactured for the U.S. Army. The weapon was never found.

The killer had been only a couple of feet from his or her victim, and, judging from the trajectory of the bullet, had fired in an upwards direction, either from the hip or from a crouching position. From the fact that Elwell allowed his visitor to see "the real him," so to speak, it can be assumed that he/she was someone he knew very well, but that this person was not among his numerous lady friends. Elwell also trusted this person well enough to casually glance through his mail in their presence, feeling no hint of danger. He probably literally never saw his death coming.

One would think these factors would considerably narrow down the number of people who could have shot Elwell, but the police seem to have been completely stymied from the start. Not only could no one think of any plausible reason for anyone to kill Elwell, no one could come up with any plausible suspect. Although he must have been shot just a short time before Mrs. Larson's arrival, no one on his very busy street saw anyone else enter or leave the house. All of Elwell's possessions--including $400 in cash--were untouched, suggesting that robbery was not a motive. Further complicating the puzzle is the fact that the housekeeper found the front doors locked. The rear and basement doors were also secured. The two keys to the house were in the possession of only Mrs. Larson and Elwell himself. The victim almost had to have willingly let his murderer into the residence.

The investigation took an initially hopeful twist when police discovered that after Mrs. Larson discovered the wounded Elwell, she removed women's lingerie from her employer's closet and hid them in the basement. (When confronted with her deception, the housekeeper muttered feebly that "I thought it would not be nice for them to be found there.") She denied knowing who was in the habit of wearing this intimate apparel. However--again putting discretion over veracity--Mrs. Larson knew perfectly well who owned the lingerie: Viola Kraus. It later emerged that after doing her little bit of crime-scene tampering, the housekeeper phoned Kraus to tell her of the shooting and assure her that the lingerie had been removed. This caused police to give another look at both Kraus and her newly-divorced husband, Victor von Schlegel, but unfortunately for investigators, both their alibis remained irritatingly watertight.

In the near-century since the murder, it cannot be said that the armchair detectives have made any further progress in solving the mystery. It has been suggested that Elwell actually shot himself, and Mrs. Larson--who obviously wished to spare her boss any posthumous scandal--disposed of the gun, but that theory smacks too much of desperate "reaching" to be taken seriously.

In his 1988 book about the case, "The Slaying of Joseph Bowne Elwell," Jonathan Goodman made what was, to date, the most exhaustive effort to explain the murder. He seized upon the fact that two years after Elwell died, Walter Lewisohn became violently insane and was institutionalized. What if, Goodman argued, Lewisohn, suffering from incipient madness, became irrationally jealous of Elwell over some joint female friend, and either killed his imagined rival or had him killed? 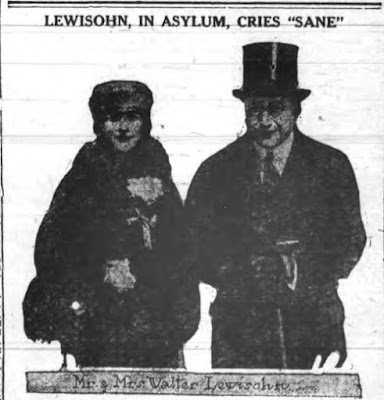 Goodman's theory is well-argued, but too dependent on a chain of "What-ifs" to be ultimately convincing. On the other hand, there was the sweet simplicity of the conjecture offered by the lead investigator into the Elwell murder, Inspector Arthur Carey. He proposed that some common thief secretly followed the mailman into the vestibule in the hope of executing some quick robbery. He found the inner door ajar, and made his way inside. When he unexpectedly came across Elwell, the burglar shot the man in a sudden panic and ran for it, shutting the door behind him.

That scenario is just tiresomely mundane enough to possibly be the truth.
Posted by Undine at 4:44 AM