The Lambert/Orpet Riddle: Who Had the Cyanide? 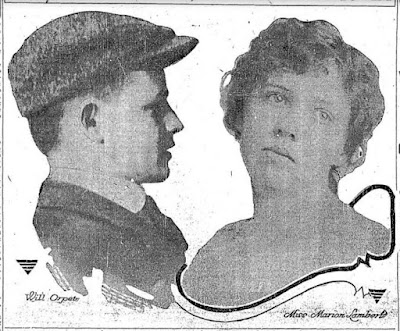 Eighteen-year-old Marion Lambert could have been Lake Forest, Illinois’ top candidate for All-American Girl. The pretty young woman was vivacious, popular with her peers, doted on by her parents, with a highly promising future ahead of her. To all appearances, she had every reason to be completely happy.

But, as we all know, appearances are very often deceiving.

On February 8th, 1916, she received a mysterious phone call. The next morning, Marion began, as usual, to head to her high school classes. At the train station she stopped and told a friend she would go to the post office to mail letters first, and catch up later.

As far as anyone knew, nothing was amiss until later that day, when her father waited at the train station to pick her up. She never arrived. At their home, her parents waited up all night for her in vain. Around dawn, her increasingly frantic father returned to the station, where in the early morning light he noticed two sets of footprints—one large, the other small—leading into a small clearing in the nearby forest. In that clearing, Frank Lambert finally found his daughter. She was lying on her side, quite cold and dead. Her lips were blistered and frothed with blood, and there was a residue of white powder in one hand. The autopsy would find that she had died from swallowing cyanide.

A search was immediately made for the person—assumed to be a man, by the footprints—who had walked into the clearing with her. Those who knew Marion immediately suspected he was 21-year-old William Orpet.

Orpet had known Marion since childhood. In recent months, after he had enrolled at the University of Wisconsin, their relationship gradually become more serious. They had gone from exchanging friendly letters to passionately romantic ones, and finally, when he was back in town on a visit, they became intimate—exactly how intimate they were is unclear. In any case, Marion was in love and believed they would marry.

Perhaps Orpet had initially felt the same. However, as has so often happened in the course of human history, once he had his “conquest,” the young man’s interest quickly began to dwindle. Back at the University, his letters to Marion became increasingly sparse and unemotional. When the girl wrote of her fears that she was pregnant, that just made him all the more anxious to distance himself from her. He even, behind her back, became engaged to another woman.

When Orpet was contacted at his Madison lodgings, he pronounced himself shocked at news of Marion’s death, but he insisted they had never been anything more than casual friends, thus kicking off a long chain of remarkably stupid lies he would tell regarding Marion Lambert. He admitted sending her what he told her were abortifacient drugs, (they were actually harmless placebos,) but denied he could possibly have made her pregnant. (Marion's autopsy established she was not pregnant—in fact, she was still a virgin when she died.) He said he had written her a “friendly” letter, apologizing for being unable to make it to Lake Forest to see her.


The police did find such a letter in the Post Office. However, they also found in Marion’s room a very different letter from Orpet, promising to come to town and meet her on February 9th. The letter in the Post Office seemed merely a clumsy effort to establish an alibi. The police, figuring they had found the Lambert poisoner, proceeded to grill the young man, as the saying goes, like a cheese sandwich.

Unfortunately for himself, Orpet proved to have about the same brains and backbone of a piece of bread and cheese. Under pressure, he stammered, flailed, tried to stonewall, and lied, lied, lied. In the final version of his story, he finally admitted to a romance with Marion, which, on his side at least, soon ended. Marion began pestering him with messages, threatening to kill herself if he refused to see her. Finally, he agreed to meet her in the woods on February 9th. There was a confrontation where she begged him to return to her. He refused, and told her of his plans to marry another. Finally, he began to walk away from the crying girl. When he heard a sudden scream, he turned back to see her lying on the snow, convulsing. When he realized she was dead, he ran away in fear and took the next train back to Madison.

Pretty flimsy stuff, all in all. And when investigators discovered that Orpet’s father, a caretaker on a local estate, used cyanide in his work, it was easy for a grand jury to indict Orpet for murder. Here was motive, opportunity, and now means, all wrapped up in one extremely unsympathetic package. Before his trial, it took nearly a month to find enough jurymen willing to say they had an open mind about the young man’s guilt.

However, as the trial unfolded, it gradually looked as if Orpet’s culpability was not quite as certain as everyone had thought. Marion’s friends admitted on the stand that she had threatened suicide if Orpet dumped her, and that she admitted knowing she was not pregnant. In fact, the more that was learned about Marion, the more evident it became that this seemingly happy-go-lucky girl had a hidden side that was moody, even neurotic. One of Marion’s teachers revealed that soon before her death, she was found alone in the high school’s chemistry lab, where she would have known cyanide was stored. Orpet himself did not make a good witness—he was, on his own testimony, a dishonest, cowardly scoundrel—but he stubbornly insisted Marion had taken the poison herself.

Finally, three chemists took the stand. They explained that Marion had died as a result of ingesting potassium cyanide—the exact type found in her high school lab. However, what had been found in the greenhouse used by the senior Orpet was sodium cyanide—potentially deadly, yes, but a completely different substance, and in a form where Marion would have had to drink a gallon of the brew for it to kill her.

And with that, the once-airtight case against Will Orpet collapsed like a pricked balloon.

After deliberating five hours, the jury found him “Not Guilty.” Orpet was free, but it was a decidedly mixed blessing. His friends largely turned against him. The University of Wisconsin declined to have him grace their campus any longer. His fiancée publicly declared she wanted nothing to do with him. He may have been innocent in a court of law, but the court of public opinion found him morally, if not literally, culpable in a young woman’s death. Orpet served in World War I, and, as far as history knows, led a quietly uninteresting life until his death in 1948.

Marion Lambert’s death is still usually described as an “unsolved mystery,” but personally, I do not see it that way. William Orpet was certainly a liar. However, I do not believe he was also a murderer.

In the 1950s, chemist and author Otto Eisenschiml formulated a “third way” theory about the case, arguing that Marion did not die as the result of murder or deliberate suicide. He suggested that this “impetuous” girl “given to dramatic acts,” stole the potassium cyanide as a ploy. Without realizing just how deadly the poison was, she took a gulp of the crystals in front of Orpet as a “final dramatic effort” to scare him into agreeing to marry her. She unwittingly took enough to instantly kill her. His theory is well-argued, but I don’t find it convincing. While she may have obtained the cyanide in an effort to force Orpet’s hand, when she saw it wasn’t going to work, I suspect that in her anger and humiliation--and no one feels more anger and humiliation than a teenager who has been jilted for the first time--Marion’s “impetuous” nature caused her to impulsively commit suicide. If she had given herself even a moment of reflection, she may well have changed her mind about wanting to die—but cyanide does not allow for second thoughts.
Posted by Undine at 4:50 AM