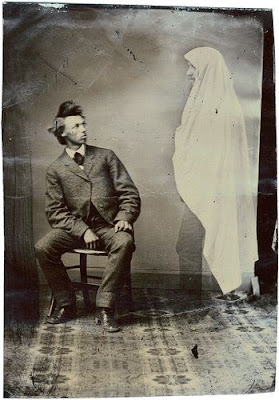 Christmas ghost stories are justifiably popular, but New Year's Eve spook tales seem far less common. If the truth be told, I find that a bit odd, as the passing of one year and the birth of another seems like a ripe time to speak of the dead among the living.

One instance of a "New Year's ghost" was related by Elliott O'Donnell in his 1916 book "Twenty Years' Experience as a Ghost Hunter." Whether the incident is strictly true or not is anyone's guess--O'Donnell was famed for never letting facts spoil his fun--but it is a welcome twist on that tired old ghost story cliche, "Spirit visits old friend to tell of his/her death."


Whilst I was still writing for "The Weekly Despatch," I happened to visit an old friend of mine, a Captain Rupert Tennison, who was staying with an aged relative in the Hagley Road, Birmingham.

"This is hardly the house you would expect to see a ghost in, is it ?" he remarked to me after luncheon. "And yet I can assure you I had a very remarkable psychic experience here, in this very room. I've often wanted to tell you about it. It happened one New Year's Eve three and a half years ago. My aunt had a nephew, on her husband's side, called Jack Wilmot, and he and I used to meet here regularly at the commencement of every New Year. On this occasion, however, my aunt informed me that Wilmot was unable to be present, as he was detained in Mexico, where he had a very good post as a mining engineer.

"I was much disappointed, for Wilmot and I were great pals, and the prospect of staying here alone with the old lady struck me as perfectly appalling. I resolved to make the best of it, however, for I was genuinely sorry for my aunt, whom I could see was quite as disappointed as I was. I arrived late in the afternoon of December 31st. We dined at seven, and at nine my aunt went off to bed and left me in this room by myself.

"For some time I read—no, not one of your books, O'Donnell—a Guy Maupassant; but the light being rather bad, and my eyes tired, for I had been travelling all the previous night, I was at last obliged to desist and devote myself entirely to a pipe.

"The servants went to bed at about ten. I heard them tap respectfully at my aunt's door on their way, and wish her good-night. After that the house was absolutely silent, so silent, indeed, that the hush began to get on my nerves, and I was contemplating retiring also, when heavy footsteps suddenly crossed the hall and the door of this room was flung wide open. I looked round in amazement. Standing on the threshold was Wilmot.

'Why, Jack!' I cried. 'I am glad to see you, old fellow. Your aunt told me you could not come. How did you manage it?'

'Quite easily,' he said in the light, careless manner which was one of his characteristics. 'Where there's a will, there's a way, you know. I've taken French leave.'

"'Taken French leave!' I ejaculated. 'Then there'll be the deuce to pay when you get back. Anyhow, that's your affair, not mine. You'll have some supper?'

"'No,' he said; 'I had a very good meal a short time ago, and I'm not the least bit hungry. We will chat instead.'

"He pulled his chair up to the table, and, leaning his elbows on it, stared right into my face.

"'You don't look very well, Jack,' I said. 'Maybe this strong light has something to do with it, but you are as pale as a sheet. Is it the voyage?'

"'Not altogether,' he replied. 'I've had a lot of trouble lately.'

"'Won't it bore you ?' he replied. 'After all, why should I bother other people with my woes. Oh, all right, I will if you like.

"'Some months ago there came to the town where I am working a wealthy Spaniard and his wife. Their name was Hervada. He was a tall, lean, sour-faced old curmudgeon, and she one of the most beautiful young creatures you can imagine. You can guess what happened?' "' You fell in love with her, of course,' I cried. "' From the moment I saw her,' Jack replied. You got introduced,' I said. Trust me,' he laughed. 'I found out where she lived, and the rest was so easy that before the end of the week I had dined with them, and also had had one clandestine meeting in the Park. At first her old villain of a husband suspected nothing. But it is infernally hard to keep up a pretense for long, when one is really madly consumed with passion. Eyes are sure indicators of what the heart feels, at least mine » are, and when Hervada suddenly looked up and caught me gazing at his wife as if I could devour her, the cat was completely out of the bag. I give him credit for one thing, however: he took it very calmly. Despite his unprepossessing exterior he could at times be extremely courteous and dignified.

"'You will oblige me by settling this matter in the way customary to gentlemen in this country,' he said. 'You must remember you are not in England now; you are in Mexico. Have you a revolver?' "'I am never without one,' I replied. "'Then,' he observed, ignoring the intervention of his wife, whose apprehensions were only too plainly more on my account than on his, 'we will step on to the verandah.'

"Jack nodded. 'Yes!' he said. 'We measured off twenty paces, and then, turning round, fired.' "' And you killed him?' "' That would be your natural surmise,' was the reply.
'But you are mistaken. It was I who was killed.'

"The moment he had said these words, he seemed to fade away, and before I could recover from my astonishment, he had completely disappeared, and I found myself staring not at him but the blank wall. And now comes the oddest part of it. I naturally expected to hear Jack was dead. I said nothing to my aunt, but I wrote off to his address at once.

"Judge, then, of my relief when I received a letter from him by return of post to say he was absolutely fit and well, and getting on splendidly. That was in February. In the following August my aunt wrote to me saying a very tragic occurrence had taken place. Jack was dead. He had been found on the verandah of an hotel in Mexico shot through the heart. Though the identity of his murderer was generally suspected, there was no actual proof, and as the man was very rich and influential, it was thought quite useless to take up the case. Now what kind of superphysical phenomenon do you call that?" Captain Tennison concluded.

"I can't exactly say," I replied. "It is one of those strange prognostications of the future that happen more often on New Year's Eve than on any other day of the year.

''I don't think the phantasm you saw was actually Wilmot's spirit. I don't see how it could have been. I think it was an impersonating neutrarian, one of that order of phantasms that have never inhabited any kind of material body, and whose special function is apparently to foretell the end of certain people, and certain people only."