Diamond in the Rough; Or, A Tale of Two Jonahs: Guest Post by Gill Hoffs 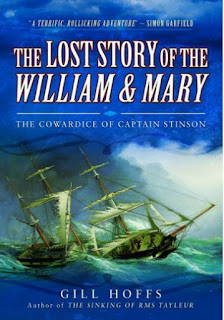 On the open sea, a 19th century ship's captain was virtually an absolute monarch. Many handled this life-and-death power with wisdom and skill. Others turned into abusive tyrants, even monsters. Sadly for the passengers of the William and Mary, one of the worst of the lot was Timothy Reirdan Stinson.

The kindest thing one can say about Captain Stinson was that he was completely unfit for his job. He was indifferent about the quality and quantity of provisions on board the vessel. If his impoverished emigrant passengers were starved, or forced to eat rotted garbage, it was of no concern to him. He saw no reason why he should bother with a ship's surgeon, trusting instead to the curative powers of ham. (All this helps explain why 14 passengers died on the ship's Liverpool-to-New Orleans journey.) His equally barbaric crew took to torturing the cook on deck, and promised passengers a dose of the same medicine if they dared to intervene. Finally, when Stinson's incompetent seamanship caused the vessel to wreck just off the Bahamas, this captain declined to go down with his ship. Rather, he and his crew commandeered the few lifeboats on board--through the handy method of taking a hatchet to a few passengers--and sailed for shore. Stinson trusted that all witnesses to his appalling behavior would soon be at the bottom of the sea, leaving him home and dry in every sense of the phrase.

It's always embarrassing for a would-be mass murderer when some of his victims turn up alive, well, and eager to talk. Such was the case with Captain Stinson. Through a combination of amazing bravery, unselfish heroism, and sheer luck, many did survive the sinking of the William and Mary, and their incredible story ignited mass outrage.

In her latest book, "The Lost Story of the William & Mary," Gill Hoffs does a wonderful job of resurrecting this bizarre 1853 tragedy. It is a tale of hardship and adventure which highlights human nature at both its worst and best. I am delighted to help revive this unjustly obscure Victorian slice of The Weird by introducing a guest post by the author, where she looks at a peculiar footnote to her tale.  Read on, and ponder the riddle of The Two Diamonds:

At a time when there were an average of three wrecks reported every day in British and Irish waters alone, the story of the White Star Line’s RMS Tayleur still stood out. This enormous iron clipper was sailing from Liverpool for Australia in January 1854 when a combination of bad luck and awful weather meant she wrecked 48 hours into her maiden voyage with shocking loss of life, despite the first to leave the ship literally jumping from the deck to the rocks beside her. While researching this tragedy for my book “The Sinking of RMS Tayleur: The Lost Story of the ‘Victorian Titanic’” (Pen & Sword, 2014, 2015), I looked at accounts of other shipwrecks of the time and discovered the long forgotten story of the William & Mary.

This ordinary emigrant ship met an extraordinary end in the Bahamas while sailing from Liverpool for New Orleans, when the vessel wrecked in a shallow channel and the captain and crew attempted mass murder (yes, really). Two very different emigrant ships, two unusual wrecks, one port of departure, and one other possible connection – a Jonah on board.

Out of approximately 700 people travelling toward the Australian Gold Rush on the RMS Tayleur that stormy January day, only 290 survived – and amongst them was a man travelling alone, John Diamond. Similarly, when the William & Mary holed on rocks eight months earlier, a John Diamond was able to escape the sinking ship in a longboat before being picked up by a passing vessel and returned to Liverpool.

The John Diamond who returned to England from the Bahamas appears in enough records to allow him to become one of the ‘stars’ in my latest shipwreck book, “The Lost Story of the William & Mary: The Cowardice of Captain Stinson” (Pen & Sword, 2016) – possibly enough information for a descendant reading this post to recognise him as an ancestor.

In 1851, this young Irishman married the pregnant eldest daughter of a mining family in Hartlepool in the north of England. Two years later, John and Susannah decided to emigrate to St Louis with her extended family so father and son-in-law could work in the mines there.  It was a tough voyage with a high mortality rate due in part to the lack of ship surgeon on board and the captain prescribing bacon to treat fever in passengers dying of measles and typhus.  Susannah and John’s little girl was among the 14 to die as the emigrant ship crossed the Atlantic.


When the captain and crew abandoned the sinking ship in the Bahamas, murdering several passengers with a hatchet as they did so, John Diamond went with them.  His pregnant wife screamed for him to come back but to no avail, and she threw her wedding ring into the water after him.  She went into labour prematurely and a Dutch doctor and midwife helped her deliver the child while she was partially submerged in the sea – literally up to her waist in water.  The baby died half an hour later but 19-year-old Susannah managed to stay alive for another 18 days, consumed with fear over the fate of her husband.  She reached the safety of the British Army barracks in Nassau then died of yellow fever, and is buried in the Bahamas.  Her family continued their journey to New Orleans then St Louis and eventually settled in Hangtown, California (so called because of the number of executions there). But what happened to Susannah’s widower?

There were around 160 adult John Diamonds of various spellings recorded in the UK census of 1851, several years prior to these wrecks. Many of the men had families, trades, or were considerably older than the average traveller looking to make their fortune in the Gold Rush or at the very least start a new life in glorious surroundings. The only information available regarding the John Diamond on RMS Tayleur is his name so it is impossible to narrow the search results down further. Did the grieving widower stay in Liverpool until a few months later when a ship meant to be one of the safest afloat sailed for Australia? Could they be one and the same? Possibly. This is just one of the many mysteries involved in these strange shipwrecks. If you can solve them, do get in touch!

Gill Hoffs is the author of “Wild: a collection” (Pure Slush, 2012) and two shipwreck books, “The Sinking of RMS Tayleur: The Lost Story of the ‘Victorian Titanic’” (Pen & Sword, 2014, 2015) and the recently released “The Lost Story of the William & Mary: The Cowardice of Captain Stinson” (Pen & Sword, 2016). She lives in Warrington, England, with Coraline Cat. If anyone has any information regarding the wrecks and the people involved, they can email her at gillhoffs@hotmail.co.uk or find her on twitter @GillHoffs.
Posted by Undine at 4:43 AM