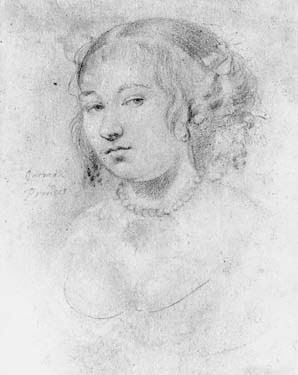 Some people become royal through an accident of birth. Others become royal through marriage. And some, like the heroine of today's post, gain a royal title as a result of thievery, prostitution, bigamy, and general all-purpose grifting. Meet Mary Moders, who for one brief but epic season became the toast of London as "The German Princess."

Moders was born in Canterbury, England, probably on January 11, 1642. Her father was said to be a reasonably successful musician. We know little of her early days, although her early biographer Charles Johnson stated that she was an enthusiastic reader of romances and adventure tales, a habit which inspired her to put on airs of "a Princess or a Lady of high Quality." Reality, unfortunately, intruded into these dreams. Instead of marrying, as she believed was her right, a "baron or squire, or knight of the shire," she was forced to settle for a shoemaker named Thomas Stedman.

Moders, however, remained certain she was born for bigger and better things. Before too many years had passed, she abandoned her cobbler and their two children. She made her way to Dover, where, with the fine disregard for legal niceties which characterized her whole career, she entered into another marriage, to "a Surgeon of that Town." Word having gotten around about her superfluous husband back home, she was indicted on a charge of bigamy, "but by some masterly Stroke, which she never wanted on a pressing Occasion, she was quickly acquitted."

She then went to Cologne, Germany, a city that had always appealed to her. Having somehow obtained a tidy sum of money, she took up residence in a "House of Entertainment, and lived in greater Splendour than she had ever done before." That summer, she frequented the fashionable German spas, where a rich, elderly gentleman fell in love with her. He showered her with money, expensive jewels, and finally proposed marriage. Moders accepted, but decided it was more prudent to take her money and run. She gathered together her ill-gotten gains, pausing only to scoop up her landlady's hidden hoard of cash as well, and fled to Amsterdam.

Moders returned to England in March 1663. She traveled to London, where she found lodgings in the Exchange Tavern. She told her landlords, a man and wife named King, that she was Lady Henrietta Maria de Wolway, only child of John de Wolway, a German earl and sovereign prince of the Empire. Alas, she had married a nobleman without her father's permission, causing this cruel parent to banish her from his dominions. The "melancholly Relation" of this "unfortunate German princess" so touched the hearts of her listeners that the Kings gave her all the money they had available, with the promise of more to come.

Mrs. King had a brother, a young lawyer's clerk named John Carleton. What better match for him, the lady reasoned, than this charming foreign aristocrat? She wasted no time introducing the pair. Although the princess warned him that her stern father "would make War upon any Prince who extended his Pity to her," Carleton was soon begging her to marry him. After displaying a natural amount of reluctance to give her royal hand to "one of common Blood," she accepted him, and three weeks after they first met, they were married. The pair settled down in Durham Yard, with Carleton frequently thanking his bride for "the prodigious Honour" she had bestowed on him by consenting to become his wife. Carleton poured all his money into providing her with clothes, jewels, carriages, and servants suitable for her illustrious rank.

After about two weeks of wedded bliss, Carleton's gratitude quickly dried up when he learned that Mr. King had received an anonymous letter informing him that his princess was "a Cheat and an Impostor." The Carleton family, showing all the natural rage of people who discover that they had made first-rate fools of themselves, marched on the princess' residence, where they impounded all her clothes and jewelry, "knocked her down," and hauled her in front of magistrates. She retorted by accusing Carleton of tricking her into marriage by pretending to be a wealthy aristocrat, and initiating a bogus prosecution against her when she turned out not to be as rich as he thought.

While sitting in jail awaiting her second bigamy trial, she entertained a steady stream of visitors who were anxious to see London's newest curiosity. They found her witty, spirited, and quite magnificently unrepentant. She was regarded as something of a public heroine. In the meantime, her quondam husband, John Carleton, attempted to counter his new role as public laughingstock by publishing not one, but two pamphlets defending himself and bitterly railing against "this two-legged Monster," the "Canterbury German," a "Production of an infamous brood, dropt from an Ale-tap, and the filthy base extraction of a Dunghill...a Storehouse of untruths, an Armory of falsehoods, a Castle of Impudency, a Treasury of Vice, an Enemy to all good." "Ladyes and Gentlemen," he pleaded, "imagine what you should have thought had you been in my place and Condition; had you heard her speak thus, seen her deportment, and had accompanyed her so much as I did; and observed her probably storyes and circumstances...and to have found her so ingenious a Woman (as indeed she is, to give the Divil his Due,) and were she honest she were excellent."

His efforts to redeem his reputation did little good. Public sympathy was very clearly with the princess. London has always loved its rogues, and in the former Mary Moders, they had a superb example of the breed. Poor Mr. Carleton just came off as a humorless whiner. 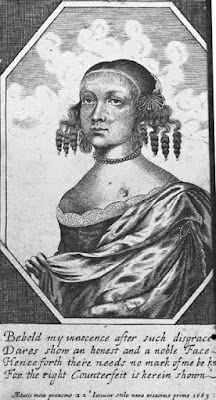 Moders pled Not Guilty at her Old Bailey bigamy trial. In the courtroom, she merrily greeted her bridegroom, exclaiming "What a quarrel and noise here's for a cheat! You cheated me and I you. You told me you were a Lord and I told you I was a Princess; and I think I fitted you!" She continued to laugh at him during the course of the proceedings. "My Lord," she told the judge, "by all that I can observe of the Persons that appear against me, they may be divided into two sorts; the one of them come against me for want of Wit, the other for want of Money."

Moders continued to insist she had been born in Cologne. She admitted having been married to Carleton, but as for her first marriage, she simply said, in effect, "prove it."

The prosecution had a surprisingly hard time doing that. Stedman himself declined to make the trip to London to testify against Moders unless he was given money for the journey. There was only one living witness to her marriage, a man named Knot. His testimony was considered inadequate evidence to prove bigamy, which was then a capital offense. Accordingly, the jury returned an acquittal, a verdict which was greeted with cheers from the spectators.

After she was freed, this notorious and beguiling figure was naturally urged to pursue a career on stage. She appeared in a number of productions, generally playing "either Jilt, Coquette, or Chamber Maid, either of which was agreeable to her artful intriguing Genius." A play, "The German Princess," was written as a starring vehicle for her. Although Samuel Pepys greatly admired Moders' "wit and spirit," he dismissed the show with the words, "never was any thing so well done in earnest, worse performed in jest upon the stage." Despite this bad review, she attracted "a considerable number of Adorers," most of whom, naturally, wound up being fleeced of their money. She also supplemented her income with a long string of brazen and elaborate con jobs. Charles Johnson sighed that "It would be impossible to relate half the Tricks that she play'd, and mention half the Lodgings in which she at Times resided. Seldom did she miss carrying off a considerable Booty wheresoever she came; at best she never fail'd of something, for all was Fish that came to her Net."

These good times could not last forever. Before too long, she was back in Newgate, charged with stealing a silver tankard. She was found guilty and sentenced to death. However, her uncanny good fortune in courts of law held out enough for the sentence to be commuted to being transported to Jamaica.

She remained abroad for two years, after which she pushed her luck by returning to England and passing herself off as a rich heiress. In this role, she married a "very Wealthy Apothecary at Westminster, whom she robb'd of above £300 and then left him."

This was her last great triumph. In late 1672, she was brought down by an accident of fate. A Southwark brewer named Freeman was robbed of £200. He enlisted a Mr. Lowman, Keeper of the Marshalsea Prison, to help him find the thief, who he suspected was a man named Lancaster who was often found in New Spring Gardens. While Lowman and his assistants were searching that area, "they spied a Gentlewoman walking in the two-pair of Stairs Room." Lowman quickly recognized her as that renowned fraud, the German Princess, who was, the law thought, safely in the West Indies. He immediately arrested her for violating her sentence of transportation.

Moders' trial in January 1673 was short, albeit not sweet. In response to being asked why she returned to England so soon, she could only make "trifling Evasions to gain Time," which managed to stretch the proceedings out for several days. Lacking any other form of defense, she finally "pleaded her Belly." After a "Jury of Matrons" determined that she was not pregnant, our Princess knew her last card had been played. She faced the inevitable death sentence "with a great deal of Intrepidity."

While awaiting her hanging, she entertained an "abundance of Visitors," and expressed fervent--and, who knows? possibly sincere--regret for her long, highly criminal past. Moders went to the scaffold on January 22 with all the élan one would expect from such an energetic and engaging adventuress. On the last day of her life, we are told "she seemed more Gay and Brisk than ever before." In a charmingly weird gesture, she went to Tyburn with a picture of John Carleton pinned to her sleeve. It is not recorded whether she did this out of sentiment or a desire that he symbolically share her fate.

Londoners wrote many eulogies, pamphlets and ballads celebrating their lost Princess, the "Crafty Whore of Canterbury," but considering the humor she consistently brought to her deviltries, she would probably have most appreciated the epitaph suggested for her by some anonymous "merry Wag":

The German Princess here, against her will,
Lies underneath, and yet, oh strange! lies still.