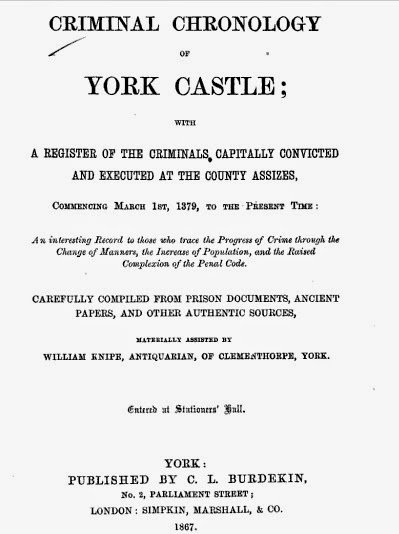 History has recorded several instances where a criminal sentenced to hang happened to survive his/her execution. Well, I'll see your "Half-Hanged Mary," "Half-Hanged Smith," "Half-Hanged McNaghten," etc., and raise you one John Bartendale, who was not only half-hanged, but half-buried.

The following account of the Zombie Piper comes from the "Criminal Chronology of York Castle" (1867):

In the reign of King Charles I., and on the 27th day of March, 1634, John Bartendale was executed on the York gallows, without Micklegate Bar, for felony. When he had hung three-quarters of an hour, he was cut down and buried near the place of execution. A short time after, a gentleman of the ancient family of the Vavasours, of Hesselwood, while riding by, thought he saw the earth move, upon which, ordering his man to alight, and dismounting from his own horse, both of them charitably assisted to throw off the mould, and to help the buried convict from his grave. He was then conveyed again to York Castle, and through the intercession of his deliverer, at the next Assizes, he obtained a reprieve. When the case was brought a second time before the judge, who seemed amazed at so signal a Providence, the resurrectionist obtained a free and full pardon. Bartendale was a piper, or strolling musician, and is noticed by Drunken Barnaby in his Book of Travels into the northern parts. Paraphrased from the Latin, it runs thus :—

"Here a piper apprehended,
Was found guilty and suspended;
Being led to fatal gallows,
Boys did cry, 'Where is thy bellows?
Ever must thou cease thy tuning.'
Answered he, 'For all your cunning,
You may fail in your prediction.'
Which did happen without fiction,
For, cut down and quick interred,
Earth rejected what was buried;
Half alive or dead he rises,
Got a pardon next assizes,
And in York continued blowing,
Yet a sense of goodness showing."

After this wonderful deliverance the poor follow turned hostler, and lived honestly afterwards. On being asked to describe his feelings and sensations while undergoing the process of hanging and entering the trap-door of death, he replied, that when he was turned off, flashes of fire seemed to dart into his eyes, from which he fell into a state of darkness and insensibility.