Unlike most people, I pay little attention to Halloween, at least as it is generally practiced today. The more it becomes just a showcase for faux-grotesque tat and adults prancing around in Sexy Vampire or Sexy Werewolf or Sexy Ebola Virus costumes, the more I do my best to just ignore the holiday.  Which ain't easy when my next door neighbors cover their front yard with cardboard tombstones, spray-on cobwebs and plastic disemboweled torsos.  And the giant black rat across the street damn near gave me a seizure the first time I saw it.

However, I do like ghosts. I like spooky black cats even more. What better for our Halloween-week Newspaper Clipping than a timely story that combines both?

From the Philadelphia Public Ledger, October 31, 1916:

Picture awakening at 2 a.m. and seeing a corpse-like looking individual with long hair and glassy eyes staring at his reflection in the mirror of the dresser with a sardonic grin twisting his thin, bluish lips. You arise from your bed shivering and turn on the gas, and the ghastly looking thing beside the dresser fades away with a rattling cough that awakens the echoes of the bedroom.

Gee, but wouldn't it get your nerve, and then some? Mr. and Mrs. Frank Ramagano, and Mr, and Mrs. Salvatore Pascale think so, and that Is why they moved away in haste today from 2008 South Fifteenth street. They had occupied the dwelling for three weeks, and every night for three weeks they declare that the aforesaid thing with the graveyard face and sixty centimeter cough has visited their respective bedrooms. Yesterday the nervous systems of
Mrs. Ramagano and Mrs. Pascale gave away under the strain and they told their husbands that they couldn't stand it any more. So at 7 o'clock this morning two big moving vans backed up to the front door and the business of moving began.

Neighbors said today they were surprised that the Ramaganos and the Pascales stood it as long as they did. They stated that no one stays at 2001 South Fifteenth street very long because the place has been haunted since a young man died in the house several years ago from tuberculosis. Emmanuel C. Kolb, the agent in charge of the house, admitted today that two families had removed from the place without giving any reasons, but on the other hand, he said another family had occupied the house over a period of years without seeing ghosts.

Mrs. Pascale told the story of her experience while movers were placing her goods in a van.

"I am go glad to leave," she said, looking apprehensively at the house. "Both my sister and myself are nervous wrecks from what we have seen.

"The very first night we slept there the thing appeared. It looked just as though it hod stepped out of a coffin. I awakened about 3 a.m. I should say feeling very chilly. Then I saw the awful thing standing by the dresser. I was paralyzed with terror and it was fully ten minutes before I had the courage to nudge my husband. He woke up and saw it, too. He jumped out of bed and lit the gas. The thing faded away, coughing. We sat up for the rest of the night and so did my sister and her husband, for they had seen it, too.

"After that we saw the ghost every night, and sometimes we could hear it prowling around in the daytime, too. Often when I was working in the kitchen I could hear a rattling cough in the upper part of the house. I would knock on the wall and the ghost would laugh at me mockingly. Frequently my sister and I could hear the thing dragging his feet along the upper hallway. Both my sister and I became so nervous that we started at every sound. The ghost appeared more frequently as Halloween approached, and we shivered at the thought of what might happen on Halloween night. We decided not to chance staying in the house over Halloween."

Hearing of the ghost stories, Mr. Kolb sent a man to inspect the property. When this man opened the cellar door a black cat scurried through the kitchen and out of the house. Mrs. Pascale nearly had hysterics when she saw the cat.

"I feared as much," she said. "How could a cat have gotten into that cellar with all of the windows locked tight?"

The appearance of the cat startled the neighborhood, too.

"I am not surprised," said the woman next door, shaking her head knowingly. "I tell you that place is haunted." 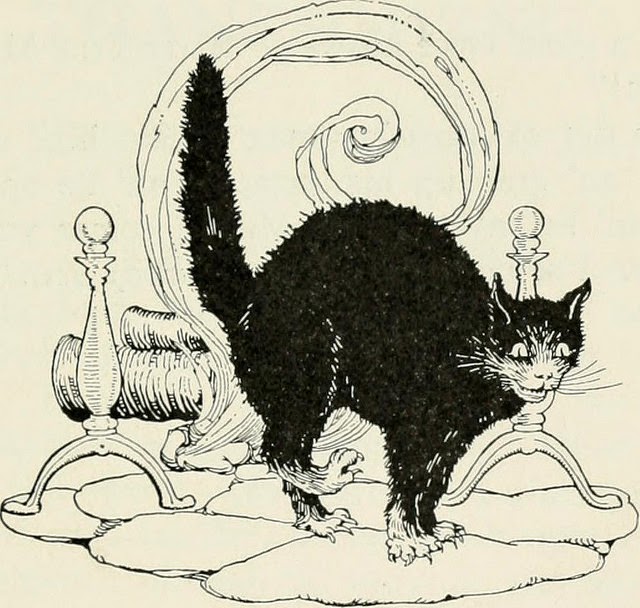