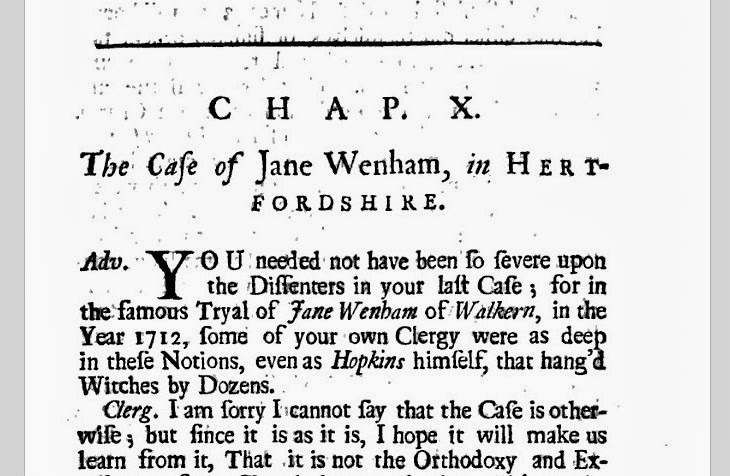 It occurred to me that after over a year of posts about mute amputees, psychic murderers, disappearances, kidnappings, poisonings, suicides, amnesiacs, poltergeists, hoodoo cats, women in furnaces, mystery blood, mystery explosions, and Satanic garden hoses, this is rapidly turning into the internet’s most depressing blog. So, for this week, I decided to present an upbeat, life-affirming story with a happy ending.

The best I could do was a witchcraft trial.

The action brought against Jane Wenham in 1712 is often, but erroneously, described as “the last witchcraft trial in England.” Wenham, an elderly, impoverished woman, had long had a negative reputation as “the wise woman of Walkern.” In February 1712, she was also dubbed “a witch and a bitch” by a local farmer who accused her of putting a curse on one of his employees. She tried to sue the farmer for defamation, but the local magistrate made what proved to be a fateful decision: he had both parties bring their dispute to the local rector for arbitration.

This rector, the Reverend John Gardiner, was a firm believer in witchcraft. At the time, he did nothing more serious than fining the farmer one shilling and instructing Wenham to be nicer to her neighbors. However, from that time on he looked at the “wise woman” with deep suspicion, particularly as Wenham was unwise enough to express dissatisfaction with the verdict with the ominous words that “if she could not have justice there, she would find it elsewhere.”

Immediately after this incident, one of Gardiner’s servants, Anne Thorne, took center stage. She suddenly fell into “fits,” which she claimed to be the work of “the witch,” Jane Wenham. Wenham was swiftly arrested and a search of her home uncovered strange ointments and cakes that were said to be used in her Satanic rituals.

At her trial, where she was indicted for “conversing familiarly with the devil in the form of a cat,” Wenham caught an amazingly lucky break. The judge, Sir John Powell, was a humane, courageously rational man who treated the whole proceedings as a farce. (Reportedly, when the prosecution claimed Wenham had the ability to sail through the air, he nonchalantly observed that there were no laws on the books against flying.) The accused was—as was almost inevitably the case in witch trials—convicted by the jury and automatically sentenced to death. Powell, however, was able to have her reprieved, and, eventually, pardoned outright.

Very unusually for a witchcraft trial, Wenham’s ordeal proved to be something of a blessing in disguise. In 1718, the case inspired Bishop Francis Hutchinson to write “A Historical Essay Concerning Witchcraft,” a fiery denunciation of the whole witch-hunt phenomenon. The work was widely read, and did much to influence opinion against the persecution of “witches.” Wenham herself was given financial support by some of her advocates, as well as a new cottage where she lived “soberly and inoffensively” until her death in 1730. A contemporary account stated that she became sufficiently well-off to provide charity for the poor, which made her “as much an object of their esteem as she had been of their detestation.”

Her “victim,” Anne Thorne, also reaped unexpected benefits from the case. As a cure for her “fits,” a doctor prescribed that she wash her hands and face twice a day, and arranged for a “lusty young fellow” to stand guard over the young woman until she recovered. Under this regime, Thorne quickly lost her "fits”—and gained a husband in her lusty and personable escort.

Would that all witch trials had ended so peacefully.
Posted by Undine at 5:06 AM