Gertie Got Her Gun 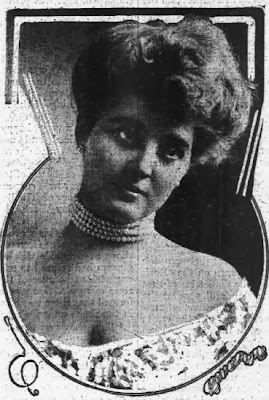 On the morning of September 25, 1911, four gunshots were heard in Denver, Colorado. They were the sounds of Gertrude Gibson Patterson—pretty, dainty, childlike, cultivated little Gertrude Gibson Patterson—pumping bullets into her husband Charles. (Charles Patterson was suffering from tuberculosis, which would have earned Gertrude the disapproval of Thomas de Quincey. He once noted that killers should only choose victims who are in good health: “It is absolutely barbarous to murder a sick person, who is usually quite unable to bear it.”)

The instantly notorious Mrs. Patterson had a colorful life even before she expressed herself with a pistol. She was born into a poor family in 1881. At the age of thirteen, she was expelled from school for what would later be described as “conduct which violated rigid rules pertaining to morality.” Soon afterwards, she acquired a whole new variety of education by eloping to Chicago with a saloon-keeper. Her father had the authorities bring the girl home, but Gertrude Gibson was determined to escape her drab surroundings. While ostensibly on her way to visit a sister in St. Louis, she instead returned to Chicago. In the Windy City, she met Emil W. Strouss, a wealthy clothing manufacturer old enough to be her grandfather.

Rich old men and beautiful young girls often see interesting possibilities in each other. Strouss persuaded Gibson’s parents to let him bring her to Europe, where he provided her with an extensive intellectual and cultural education. The coal miner’s daughter from Illinois soon acquired all the accomplishments of a great lady.

Four years later, the pair was back in Chicago, where Gertrude lived a sumptuous lifestyle under Strouss’ “protection.” This evidently still wasn’t enough for Miss Gibson. At a skating rink, she met a handsome but impecunious twenty-year-old, the soon to be ill-fated Charles Patterson. A clandestine romance soon blossomed between them. Before long, she had persuaded him to elope to California with her, and they married in Carmel. When their money began to run low, the newlyweds went back to Chicago. Three months later, she told her husband she was going to visit her sister in St. Louis.

This seems to have been our Gertrude’s favorite cover story. Although she had promised Charles never to see Strouss again, she and her old benefactor sailed off to Paris together. Patterson got hold of the passenger list of their liner, and discovered that his wife was traveling as “Mrs. Emil Strouss.” She was also sharing a cabin with her "husband." Soon after this, Patterson came down with tuberculosis, and entered a sanitarium in Denver. His wife joined him there, but whatever hopes either might have had for a happy reunion were dashed when Gertrude learned her husband was suing Strouss for alienation of affections. She began to talk of divorce.

On that fatal September day, Mrs. Patterson called her husband and asked for a meeting near his hospital—an encounter that quickly developed into an argument over his planned lawsuit. Gertrude Patterson got the last word in the quarrel by pulling a gun out of her purse and shooting Charles dead.

Her initial story was that her husband had committed suicide after having “beaten me fearfully.” When it occurred to her that suicides rarely shoot themselves twice in the back, she admitted having fired the shots in self-defense after “being slapped, beaten, spat upon.”

All in all, she put up a most unconvincing defense at her trial, and courtroom observers generally agreed with one journalist’s prediction that “It’s thirty for Gertie.” Then, a surprise witness appeared, a Francis J. Easton.

Easton testified that on the morning of September 25, he was strolling around Denver—for no particular reason, just seeing the sights—where he saw a woman he identified as Gertrude Patterson arguing with a man. This man, said Easton, began repeatedly hitting the woman, knocking her onto the ground. Then, “I heard shots and he was down.” Before he turned and left the scene—he gallantly stated that “I didn’t want to get my foot into that affair”—he could see that “The woman’s life was in danger.”

The jury found her “Not Guilty,” to the sound of cheers in the courthouse for “Good old Gertie.” (Although one disgusted male voice was heard to shout, “Why should a woman go to Reno? Get a gun and come to Denver!”) Jurors admitted afterward that it was solely the last-minute testimony of the mysterious stranger Francis Easton that “took the rope from off [Gertrude's] neck.”

Horace Benson, the attorney who had led the unsuccessful prosecution against Mrs. Patterson, was not inclined to take her suggestion to him that they should just “forgive and forget.” He had the William Burns Detective Agency do a little sleuthing into the oh-so-convenient Mr. Easton. It turned out that after his testimony, Easton vanished into Canada just as abruptly as he appeared, carrying with him “a roll of bills big enough to choke a dog.” Emil Strouss, it was believed, had given his charming protégée one last great gift.

Stories vary about what Denver’s prettiest gunslinger did next. There were reports that she took a tour of Europe, only to be unlucky enough to book a trip on the Titanic. The suggestion is that her late husband got his justice at last. Other sources, however, assert that she eventually returned alive and well to America and married a judge.

The most plausible report claimed that she changed her name and quietly married the ever-helpful Mr. Strouss. After all, those two certainly seemed made for each other.
Posted by Undine at 4:50 AM