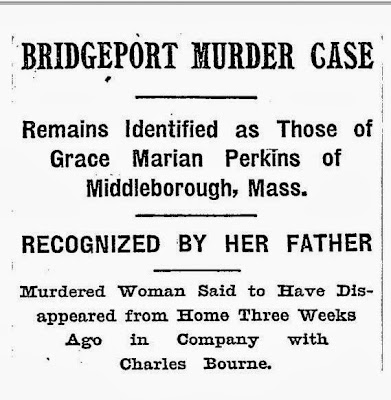 In September 1898, the mutilated body of a young woman was found in a pond in Bridgeport, Conncecticut. Her name—let alone the name of her murderer—remained a complete mystery until Frank Perkins, a resident of Middleborough, Massachusetts, identified the body as that of his twenty-year-old daughter Grace. Her dental records confirmed the father’s identification. Grace Marion [or Marian] Perkins had disappeared several weeks previously. She was last seen with her boyfriend of two years, Charles Bourne, who was also missing. After Miss Perkins’ body was identified, newspapers announced, “The friends of Bourne hope that when he returns he can give an account of himself that will clear him of any guilt,” but it was clearly looking bad for the young man.

Well, no. Miss Perkins’ father brought his daughter’s remains home for burial, the grave was dug, and grieving family and friends gathered for the funeral.  Police continued their manhunt for the chief suspect in the girl's murder, Charles Bourne. And then, right before the funeral services took place, the Perkins home received unexpected visitors: Grace Perkins, alive, well, and cheerful, accompanied by none other than Charles Bourne. The pair had secretly run off together to Providence, R. I.

Grace, who had absolutely no idea that she was a murder victim, was quite shocked by the news, and who can blame her?

The body was eventually identified as a young woman named Emma Gill. She had gone to a midwife named Nancy Guilford for an abortion, which accidentally killed her. Guilford was found guilty of manslaughter and served eight years in the state prison.

[A footnote: Alas, the two runaway lovers did not have a happy ending together. The last we hear of Miss Perkins was in 1902, when she married, not Charles Bourne, but a George Sylvester Pierce.]