The Body in the Cylinder 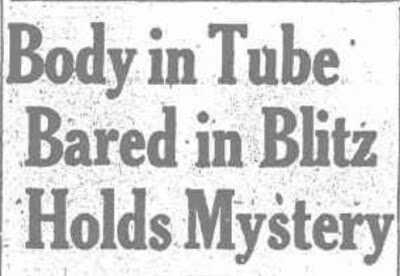 During the London Blitz, a bomb dropped on Liverpool uncovered a water-tight steel cylinder that had been embedded in a concrete building foundation. The object attracted little notice among the debris. Local residents used it as a bench. Children played around it. Then, over four years later, in July 1945, it broke open, and a small boy peeked inside…

To his shock, the boy discovered the cylinder was actually a coffin, containing a male skeleton. The remains were fully dressed, in expensive Victorian-era clothing, and one finger bore a gold signet ring. The cylinder also contained a diary from 1884 (the entries were, unfortunately, illegible,) a postcard dated July 8, 1885, a railway ticket dated June 27, 1885, and a business paper with a letterhead. The items bore the name "T.C. Williams."

Research established that "T. C. Williams" was paint manufacturer Thomas Creegan Williams. Williams’ business failed in 1884, and he subsequently vanished from history. No records could be found of him after his bankruptcy, suggesting that he either changed his name, or simply disappeared. It was presumed that he was this mysterious skeleton, but that was never proven. No cause of death could be established. (Although there was a skull fracture by the left ear, the coroner, rather oddly, seemed to consider that irrelevant.) Just to complicate matters further, a Scotland Yard pathologist suggested the body had not been dead for more than ten years, but he conceded the body could date from 1885.

Authorities had even less luck in determining how the man—whoever he was—got into this cylinder, which was believed to have originally been part of a ventilation shaft. Did he, for some inexplicable reason, crawl into it himself? Was Williams murdered, with the body cunningly hidden?

It is hard to believe this man entered the cylinder of his own free will, or even through an accident. It seems nearly as unlikely that a murderer would go to such trouble to hide the body, and still leave such obvious evidences of his victim’s identity, not to mention a valuable ring. These items used to identify the body as Williams actually seem almost too obvious. And that brings up the possibility that the bankrupt businessman was more villain than victim.

Could T.C. Williams have faked his own death, as a way of escaping creditors and a wife and children that he may have seen as a financial burden? Did he, through some means, acquire a corpse that he dressed in his own clothes, with documents that would, when the body was eventually found, (and would presumably have become unrecognizable,) let the world assume he was dead and gone? Only to find he hid the body rather too well?