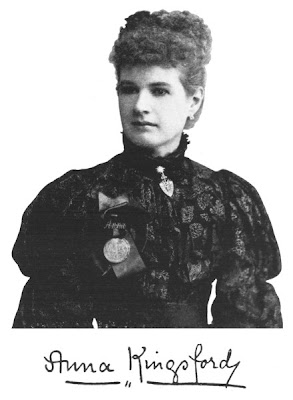 “It was no human life that was involved in the matter, for that only is a human life which is a humane life.”
-Anna Kingsford


If her own account can be trusted, pretty, delicate, brilliant, charming, warm-hearted Anna Kingsford was one of the most dangerous people who ever lived.

Kingsford paired high ideals and deep esoteric wisdom with indomitable will and an unshakable belief that “ends justify means.” For all her knowledge, she deliberately flouted the truism that everything we do in our lives inevitably boomerangs on us. In the end, this may have literally been the death of her.

Anna “Annie” Bonus was born in Stratford, England on September 16, 1846. Her father was a wealthy merchant who was able to give his frail, beautiful daughter the pampered, cultured upbringing of the classic Victorian belle. Most unusually, though, she was given full rein to follow intellectual pursuits as well. Her original pursuits were along fairly traditional, if precocious, literary and academic lines, but as she reached adulthood the focus of her attentions turned to the occult. From childhood, she believed she had psychic abilities—a friend once described her as a “born seer…seeing apparitions and divining the characters and fortunes of people.”

In order to escape unwanted suitors, when she was twenty-one she married an Anglican clergyman named Algernon Kingsford, on the condition that she would continue to lead a fully autonomous life. (Years after her marriage, after she reread some of her early letters to him, she wrote bemusedly, “What a disagreeable person I must have been to have written to Algernon in this way! They are full of declarations that my chief reason for marrying was to be independent and free. I can only wonder that he took me.") Although on their honeymoon the couple conceived a daughter, Eadith, Anna’s chronic poor health ensured that their relationship became celibate—which may well have suited them both. In their own unconventional way, the Kingsfords remained devoted to each other. The new Mrs. Kingsford continued her life of the mind. She adopted vegetarianism, spiritualism, theosophy. Mrs. Kingsford had visions, and was convinced she communicated with “genii.” Anna was a talented writer who published a number of well-regarded theological essays, poems, short stories, and novels, and she eventually bought the journal “The Lady’s Own Paper,” installing herself as editor. (The magazine failed two years later, as Kingsford refused to accept advertising that violated her beliefs.) She was also a talented lecturer, with a magnetic stage presence.

In 1873 she met Edward Maitland, who became her collaborator, biographer and platonic soul-mate. With her husband’s full approval, Maitland accompanied her to Paris when she decided to take up the study of medicine. Her aim in pursuing this new career was partly to promote her vegetarian, anti-vivisection beliefs, and partly to prove that women were as capable of intense study and rational thought as men. It was while she was a medical student that she was confronted first-hand with vivisection. The nightmarish sights and sounds of live, un-anaesthetized animals being dissected for medical experiments so horrified her that it became her chief mission in life to campaign against something she saw as nothing but cold-blooded, ghoulish murder. (She often volunteered herself for dissection if the doctors would only leave the animals alone, and I’m convinced that if anyone had taken her up on this offer she would have kept her end of the bargain.) However, as it was commonly believed vivisection was necessary for scientific research, her efforts proved futile.

Her failure to stop this animal torture left her distraught. While a student, she wrote: “I have found my Hell here in the Faculté de Médecine of Paris, a Hell more real and awful than any I have yet met with elsewhere, and one that fulfills all the dreams of the mediaeval monks. The idea that it was so came strongly upon me one day when I was sitting in the Musée of the school, with my head in my hands, trying vainly to shut out of my ears the piteous shrieks and cries which floated incessantly towards me up the private staircase…Every now and then, as a scream more heart-rending than the rest reached me, the moisture burst out on my forehead and on the palms of my hands, and I prayed, ‘Oh God, take me out of this Hell; do not suffer me to remain in this awful place…’”

December of 1877 was a crucial moment in her life. While listening to one of her instructors, Dr. Claude Bernard, lecturing on how he had slowly baked live animals to death in order to study body heat, Kingsford suddenly boiled over in fury. She leaped from her seat and shouted, “Murderer!” After a brief, angry exchange with her teacher, she marched out of the classroom.

The man was a tormentor of defenseless animals, creatures she believed had souls as precious as our own. She wanted to see him punished. She would see him punished. She suddenly felt herself become “a spiritual thunderbolt.” With all her might, she willed the doctor dead. And then she fainted.

Very soon after this episode, Dr. Bernard suddenly fell very ill, of a disease no one could identify. Six weeks later, he died.

Kingsford was elated. She wrote Maitland, “Woe be to the torturers…I will make it dangerous, nay, deadly, to be a vivisector. It is the only argument that will affect them. Meanwhile, thank God the head of the gang is dead.”

Anna Kingsford received her degree (graduating second in her class) in 1880. She was at that time the only student to graduate without experimenting on animals. In 1886, her vengeful attentions turned to Dr. Paul Bert, whom she called “the most notorious of the vivisecting fraternity.” (Dr. Bert was certainly notorious to anyone who had the misfortune to live near his laboratory. He often left overnight semi-dissected, but still living, animals. Their agonized cries kept the entire neighborhood awake.)

Dr. Kingsford got out her thunderbolt. And Dr. Bert began to slowly waste away. He died in November 1886.

Kingsford exulted in her new-found weapon. She wrote, “I have killed Paul Bert, as I killed Claude Bernard; as I will kill Louis Pasteur, and after him the whole tribe of vivisectors.…it is a magnificent power to have, and one that transcends all vulgar methods of dealing out justice to tyrants.” (Maitland later defended Kingsford efforts at psychic assassination with the argument she was “under direct divine impulsion,” imparted to her by “the Gods.” He added, “Humanity is enriched by the loss of those who brutalize and debase humanity.”)

She next turned her lethal attentions to Pasteur. Unfortunately for Kingsford, the use of negative forces, no matter how noble the ultimate goal, is an ultimately self-destructive weapon. (Maitland wrote that she admitted that her “projections” against the doctors “took from me my nervous force,” but she saw the sacrifice as well worth the results.) In November of 1886, while on her way to investigate Pasteur’s Paris laboratory, she was caught in a bad rainstorm that left her chilled and completely soaked. It was too much for her chronically fragile physical state. She developed pneumonia, which eventually became pulmonary tuberculosis. It killed her on February 22, 1888. Her friend Sir Richard Burton wrote that she spent her final months “suffering in mind and soul…at the sights and sounds connected with Parisian vivisection.”

Luckily for Dr. Pasteur, Kingsford’s illness also drained the force of her thunderbolts. He nearly died of a sudden, inexplicable illness in February 1887, but soon recovered completely, living and working until 1895.