The Ghost and Mrs. Binnington 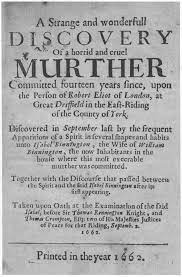 Accounts of the ghosts of murder victims returning to seek justice are far from uncommon.  One of the more unusual examples is this surprisingly little-known story from Restoration England.

In the spring of 1662, a young woman named Isabel Binnington and her husband William moved into a cottage in the Yorkshire village of Great Driffield.  Some weeks after the couple moved in, Isabel noticed a small depression in the floor of the home.  Hoping that perhaps a previous resident had buried some valuables there, she started to dig.  Imagine her disappointment when, instead of money or jewelry, she uncovered human bones.  Perhaps such unpleasant discoveries were common in 17th century villages, because Mrs. Binnington merely shrugged and put the whole business behind her.

On the evening of August 23, Isabel was sitting by her hearth fire when she suddenly noticed she was no longer alone: a blond young man, barefoot and dressed all in green, was standing before her.  Her first thought was that the stranger was some traveler seeking lodging for the night.  However, as he moved closer to her in complete silence, she became afraid and demanded in the name of the Father, Son, and Holy Spirit that he speak to her.

The visitor obliged.  And did he have a story to tell.  He said that his name was Robert Eliot.  Fourteen years earlier, he had been robbed and murdered in that very cottage by a local woman named Mary Burton.  Eliot had loaned Burton money she later refused to repay.  They quarreled over the issue, which Burton and two co-conspirators brought to a fatal conclusion.

Eliot had been compelled to haunt the location ever since, and was doomed to remain for seven more years.  Apparently the discovery of his secret grave inspired him to plead that Mrs. Binnington saw to it that his murderers paid for their crime.

Over the following days, Eliot’s spirit provided extensive information about his life, birthplace, family, and the particulars of his murder.  Mrs. Binnington related all of it to the local JPs, but although these details were startlingly specific (down to his mother’s maiden name and the street where she had been born,) the authorities were understandably uneasy about launching a murder trial where the sole witness was a ghost. However, the JPs were sufficiently intrigued to ask Eliot (via Mrs. Binnington) if there were more local spirits in his same plight.  The ghost replied that there were four others. Isabel continued to press the matter to the authorities, providing additional evidence about her spectral client, as well as demands that the village church offer prayers for his murderers to be duly punished.

Then things got really weird.  Isabel told the JPs that the ghost had warned her of an assassination plot that was currently being hatched against Charles II.  And she had all the details.  She identified two men (a father and son named Jenkins) in the king’s household as the primary conspirators, and was able to say exactly how they communicated with their confederates.  If the judges did not act on her information, Isabel insisted, the king might very well die.  And it would all be their fault!  (Intriguingly, Todd Butler, the main modern researcher of the Binnington case, noted in his 2011 article, “The Haunting of Isabell Binnington,” that two men named Robert and Philip Jenkins were part of the Royal household at the time, suggesting that this alleged conspiracy may well have existed.)

One has to have some sympathy for the JPs, who were caught between a legal Scylla and Charybdis.  If they acted on the say-so of a ghost, they ran a very good risk of looking utterly ridiculous, if not barking mad.  If they ignored Mrs. Binnington’s allegations, they risked letting a murder go unpunished, not to mention the possible assassination of their king.

Perhaps this dilemma is why our narrative ends on such a frustratingly unresolved note: no one knew what to do next.  Everyone’s reaction to Mrs. Binnington’s remarkable story seems to have been, “OK, so your ghost friend is dropping a dime on his murderers.  Whaddaya expect us to do about it?”  The two contemporary pamphlets which give details about Isabel’s testimony give no hint that it spurred any sort of constructive action, and she--not to mention the unhappy ghost of Robert Eliot--immediately disappeared back into historical obscurity.

You might say this is one of those ghost stories that starts with a bang and ends with a whimper.